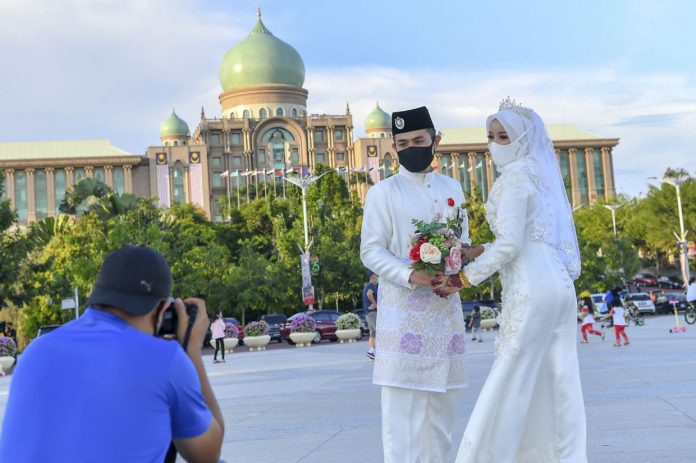 PUTRAJAYA, Sept 10  — The transition to Phase Two status of the National Recovery Plan (PPN)  has paved the way for newly-wed couples to cross districts and capture happy moments of their marriage using the panoramic scenes in Putrajaya as a backdrop.

Immediately after their marriage solemnisation ceremony at the Federal Territory Religious Department (JAWI) in Kuala Lumpur, Mohd Fauzi Amin and his bride June Asmerahawa Minhad raced to Dataran Putra in Putrajaya to snap pictures using the Perdana Putra and Masjid Putra as background.

Fashionably dressed in their all-white wedding outfit and wearing the mandatory face mask, Mohd Fauzi, 29 and June Asmerahawa, 33, arrived at Dataran Putra at 6 pm and began striking romantic poses much to the delight of visitors.

“Putrajaya is known for its beautiful scenery. And because we are now allowed to cross districts, we decided to come here to take pictures,” said Mohd Fauzi, who resides in Sentul, told Bernama today.

He said he did not expect to have the opportunity to travel to Putrajaya as inter-district travel was not allowed until today.

“When we moved to Phase Two of the PPN, it helped with our our marriage plans because we saved on travelling time since there are no roadblocks anymore,” he said.

His bride, June Asmerahawa said initially, she only planned to record her wedding moments by taking pictures around the city centre like KLCC and Titiwangsa Lake Garden.

“When the district borders were opened, we immediately decided to travel to Putrajaya because of the beautiful scenery here,” she said.

She also expressed her gratitude because her wedding which had been postponed for six months due to various reasons is finally over.

“The solemnisation ceremony went smoothly and adhered to standard operating procedures (SOP). JAWI also introduced new rules where couples need to take the COVID-19 test and follow very stringent SOP to ensure there is no transmission of the virus,” she said.

On Wednesday, Prime Minister Datuk Seri Ismail Sabri Yaakob announced that those living in the Klang Valley and who had been fully vaccinated with the COVID-19 vaccine can cross districts beginning today after Selangor, Kuala Lumpur and Putrajaya moved to Phase Two of the PPN.

Phase Two of Sarawak Pan Borneo Highway will be continued –...