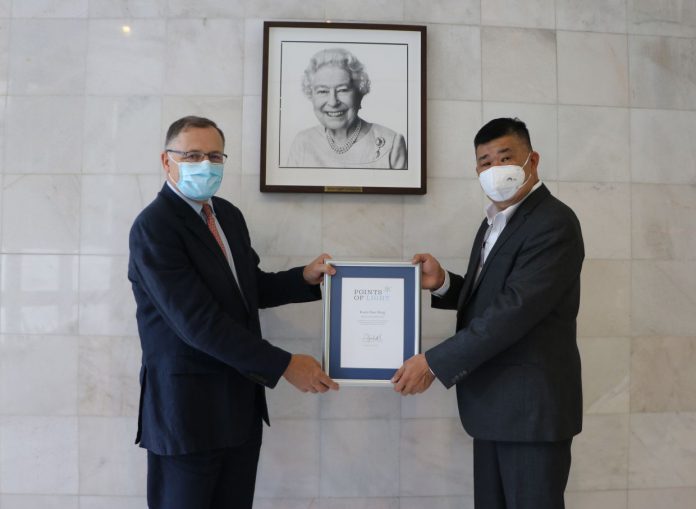 KUALA LUMPUR, Sept 15 — Social activist Kuan Chee Heng hoped that the Commonwealth Points of Light Award bestowed to him in recognition of his exemplary service to the community will pave the way and inspire more individuals, non-governmental organisations and corporate companies to come forward in extending welfare and humanitarian assistance not only to fellow Malaysians but also to refugees and UNHCR cardholders on humanitarian grounds.

Kuan, 57, better known as ‘Uncle Kentang’, said the award belongs to all donors and Malaysians who work hard and support all initiatives taken to uplift the quality of living.

“I hope that this international award signed by Her Majesty The Queen of England will pave the way for more parties to come forward and render welfare and humanitarian assistance not only to fellow Malaysians, but also refugees and UNHCR (United Nations High Commissioner for Refugees) (card)holders in Malaysia during this trying times.

“With the current restriction as a result of the pandemic, refugees and UNHCR holders are suffering even more,” he told Bernama in an interview after receiving the award from British High Commissioner to Malaysia, Charles Hay, at his official residence here, today.

Hay presented the award on behalf of Queen Elizabeth II.

The Commonwealth Points of Light Award is given by Her Majesty The Queen, as Head of the Commonwealth, to outstanding volunteers across the 54 Commonwealth nations for the differences they are making in their communities.

Kuan is the fourth Malaysian to receive the honour since its inception in 2018.

Hailing from Batu Pahat, Johor, Kuan has been involved in humanitarian work for the past 20 years, including dispensing aid to many UNHCR cardholders – namely the Afghans and the Rohingyas.

On another matter, Kuan said he and his team members will embark on an initiative of sending ambulance service to transport COVID-19 patients from their home to the nearest hospitals in Klang Valley on a donation basis, starting from tomorrow. He said there are four ambulances in the fleet so far.

The philanthropist, who is known as Uncle Kentang since the days he started distributing potatoes to the poor, said he is also currently negotiating with the respective state governments to open a resort-style old folks home in an effort to provide high quality and conducive living for the elderly for free.

Meanwhile, Hay said the award bestowed to Kuan is a fitting acknowledgement of the latter’s tireless efforts in helping those in need.

“It is important to recognise exceptional volunteers like Mr Kuan and share their stories of service. I hope this can inspire others to contribute back to the society,” he added.