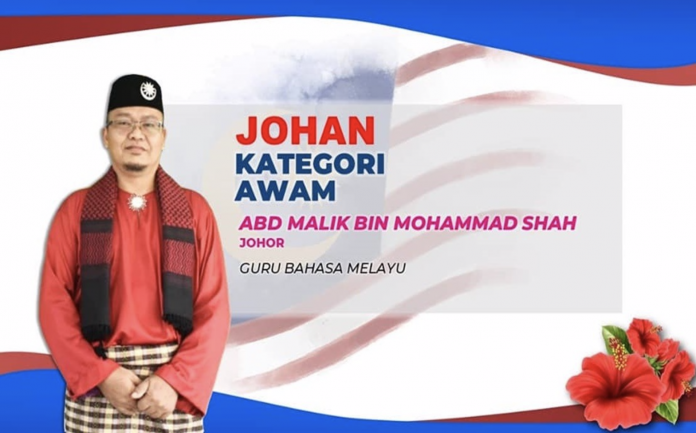 MELAKA, Sept 16 — Oratist Abdul Malik Mohamad Shah did not let a virtual oratory competition stand in his way of delivering a strong performance to win not one but three awards at the national-level Yang Dipertua Negeri of Melaka Cup oratory competition (PPRN) with the theme “Rukun Negara as a Principle of Unity for the Success and Stability of the People”.

The Bahasa Malaysia teacher impressed the judges with his eloquence and valid arguments to be crowned winner of the final round of the public speaking competition held online at Seri Negeri, here, today.

The Malaysia Day celebration today was even more momentous for Abdul Malik when earlier he walked away with the competition’s Public category as well as Best Orator, thus beating 25 finalists from the five competing categories.

Clad in a red Baju Melayu, complete with headgear, Abdul Malik took home a cash prize of RM5,000 and a trophy among others after beating Zaid Mohd Roslan Ahmad Burhan of Melaka and Terengganu’s Sidaqi A. Rahim.

Meanwhile, displaying fluency in Malay and in an understated style, P. Selvi emerged champion in the non-Malay category. She highlighted the idea of ​​harmony in society to carry her to her win.

The Melakan, who works as a part-time tutor, took home RM3,000 in cash after beating Haw Wai Kiat from Selangor and GT Shagaan from Negeri Sembilan into second and third places respectively, and she also won the Special Jury Award for Best Dress (non-Malays).

Meanwhile, the Secondary School category was won by Aiena Batrisya Sulaiman from Tunku Kurshiah College, Negeri Sembilan who won a RM1,500 cash prize along with an accompanying trophy, among others besides winning the Special Jury Award for Best Speech.

A total of 970 entries for five categories were received for the competition.