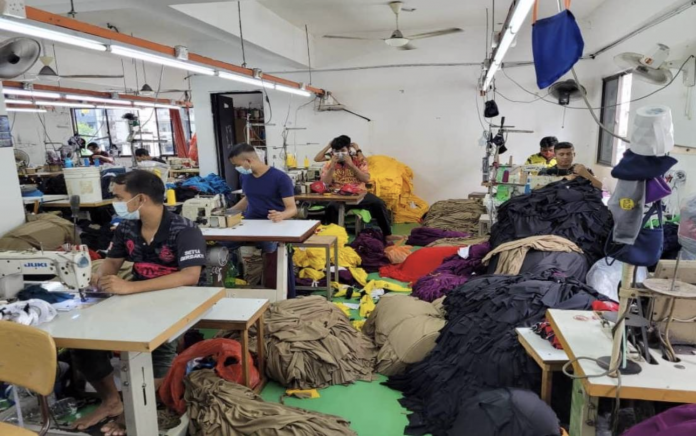 Immigration Department director-general Datuk Khairul Dzaimee Daud said the illegal immigrants, aged between 17 and 67, comprising Bangladeshis, Myanmarese and Indonesians, were arrested at the factory in the raid conducted at about 4 pm.

Also arrested was a 37-year-old Malaysian woman,  who is the director of the company, which is said to be able to obtain sales of between RM130,000 and RM150,000 a month, he added.

“The factory operators is believed to have used the PLKS, suspected to have been obtained through the ID-Hack syndicate, to set up the garment factory in Malaysia , which produces garments for markets in the Klang Valley and Selangor since 2012,” he said in statement today.

He said raid was carried out following the success of a series of operations conducted by the Immigration Department and the Malaysian Anti-Corruption Commission (MACC) since last April to track down those using PLKS stickers issued by the ID Hack syndicate.

He said initial investigation found that factory operator set up a company with the cooperation of Malaysians and employed illegal immigrants to maximise profits.

“The factory operator rented several commercial premises, including a three-storey building to be used as a garment factory, where the garments are cut and sewn, as well as used as hostels for its workers, and also a premises which is used as the factory’s exhibition and sales centre,” he added.

He said the foreign workers were paid a salary of RM1,600 a month.

During the raid at the factory, Khairul Dzaimee, said the department seized a certain amount of cash, believed to be collection of the company sales and several documents, including several Vehicle Ownership Certificates registered under the company name.

He said those arrested were detained for 14 days to facilitate investigation under Section 51(5) (b) of the Immigration Act.

The factory operator and the Malaysian woman would be investigated for, among others, employing illegal immigrants, money laundering and smuggling of immigrants, he added.

Criticism, mocking of science teacher on DidikTV is cyberbullying – Saifuddin