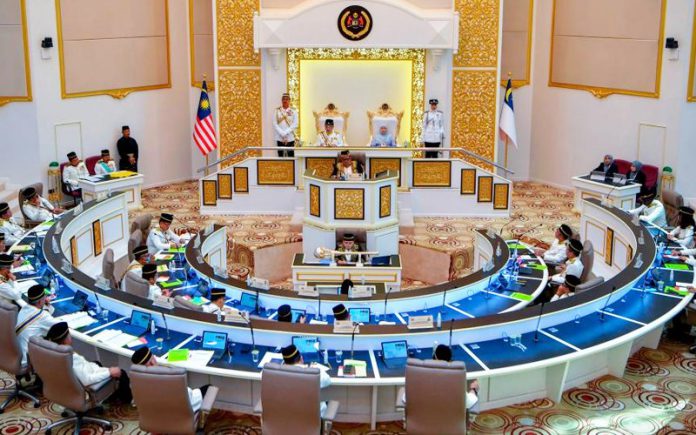 KUALA LUMPUR, Oct 6 — An Emergency proclamation can be declared throughout Melaka to postpone state elections should there be concerns over COVID-19 infections in the state or the country.

Constitutional expert Prof Datuk Dr Shamrahayu Ab Aziz said although the Melaka state elections would need to be held 60 days after the state legislative assembly was dissolved in accordance with Article 19 (4) of the Melaka state constitution, the Yang di-Pertuan Agong still has the authority to declare an Emergency throughout the entire state.

Article 19 (4) of the Melaka state constitution states that an election must be held within a period of 60 days from the dissolution of the state assembly.

“….It is the same as what was done in Sarawak, several locations such as Batu Sapi, Bugaya (both in Sabah) and Grik, Perak and the jurisdiction lies under the authority of the Yang di-Pertuan Agong under Article 150 of the Federal Constitution,” she told Bernama today.

On July 31, Yang di-Pertuan Agong Al-Sultan Abdullah Ri’ayatuddin Al-Mustafa Billah Shah declared an Emergency Proclamation for the whole of Sarawak effective Aug 2 till Feb 2, 2022, thereby postponing the state elections from being held during the period.

Ab Rauf announced in a special media conference yesterday that the Melaka state assembly was dissolved on Oct 4 upon consent by Yang Dipertua Negeri Tun Mohd Ali Rustam and that the Proclamation of the Dissolution of the 14th State Assembly was gazetted on Tuesday.

Shamrahayu, who is also Incumbent of the Malay Rulers Chair at Universiti Teknologi Mara (UiTM), said there were no conditions in the state constitution stating that the Melaka Yang Dipertua Negeri had to hold any discussions with any other party regarding the dissolution of the state assembly aside from the Chief Minister’s request.

“So to me, if there is a request from a chief minister who has lost the confidence of the majority, then based on Article 8 (2) of the Melaka Constitution that states that the Yang Dipertua Negeri can act on his own discretion to either appoint a chief minister, to consent or not consent to the dissolution of the assembly if a request is made.

Regarding the Emergency (Essential Powers) Ordinance 2021 that was gazetted to control the spread of COVID-19, including the increased compounds compared to the RM1,000 stated in Act 342 and might still be unresolved, Shamrahayu said the ordinance could still be used in general.

“When we refer to Section 15 of the Emergency Ordinance relating to dissolution, state legislative assembly meetings or summons, it is stated that the dissolution of the state assembly requires the consent of the Yang di-Pertuan Agong when the dissolution occurs during a period of Emergency.

“But because the Emergency has ended, although the Emergency Ordinance is still in effect, Section 15 can only be applicable in a period of emergency. As the Emergency ended on Aug 1, assembly sittings and dissolutions can occur,” she said.

Section 15(1)(a) of the ordinance states that throughout the period the Emergency is in effect, matters pertaining to summoning, proroguing and dissolving a state assembly in the Eighth Schedule of the Federal Constitution, any state constitution or state enactment would not be applicable.

Section 15(1)(b) states that the state legislative assembly must be summoned, prorogued and dissolved at a date as deemed fit by the Yang di-Pertuan Agong after meeting with the state’s Sultan or Yang Dipertua Negeri.

Section 15(2) meanwhile states that any state legislative assembly sitting that was summoned before the beginning of the ordinance’s effective date but has not been held yet was cancelled.

Another legal expert, Assoc Prof Dr Muhammad Fathi Yusof from Universiti Teknologi Malaysia (UTM), agreed with Shamrahayu, saying the Yang di-Pertuan Agong had the authority to declare an emergency if he was satisfied that there was a credible threat to the safety, economic wellbeing and public order of the country.

“In this matter, the factor being brought up is the COVID-19 pandemic. If the Yang di-Pertuan Agong wishes to use his authority, the risk of COVID-19 being spread due to the state elections need to be proven honestly, transparently and truthfully.

“The parties that will be involved in this process would naturally be the Health Ministry, the National Security Council (MKN), the Election Commission and the police. The aspects that need to be evaluated include the infection rate in Melaka, campaign and voting standard operating procedures (SOP), the estimated intensity of campaigning and the capabilities of the enforcement machinery,” he said.

Universiti Islam Antarabangsa Malaysia (UIAM) legal and constitutional expert Assoc Prof Dr Khairil Azmin Mokhtar concurred with Shamrahayu and Muhammad Fathi’s assessment, pointing out that the Yang di-Pertuan Agong could declare an Emergency throughout Melaka based on the prime minister’s advice if a state election is not deemed suitable at this point in time.

RCEP can be an economic recovery tool against COVID-19, says expert