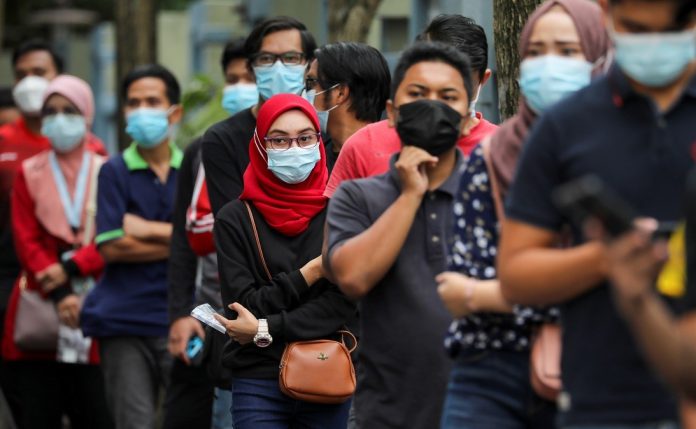 PUTRAJAYA, Oct 8  — The unemployment rate in Malaysia for August 2021 declined by 4.6 per cent to 748,800 persons versus 778,200 persons in July 2021 amid more economic activities permitted to resume, the Statistics of Labour Force, Malaysia, August 2021 disclosed today.

The report released by the Department of Statistics Malaysia (DOSM) also showed that the number of employed persons rose by 0.5 per cent month-on-month to record 15.38 million persons in August from 15.29 million persons in July,  with employment-to-population ratio picked up by 0.2 percentage points to 65.2 per cent.

Chief Statistician Datuk Seri Mohd Uzir Mahidin in a statement today said the encouraging labour force situation was observed in August 2021 as more economic activities were permitted to resume in compliance with the standard operating procedures (SOP) to curb the spread of COVID-19.

“This was indicated by the rise in employment while unemployment decreased during the month,” he said.

In August 2021, several states were elevated into the next phases of the National Recovery Plan (NRP).

Perlis and Sarawak had shifted into phase three from Aug 4 except for certain districts in Sarawak which remained in phase two; Negeri Sembilan and Wilayah Persekutuan Labuan had switched to phase two and phase four respectively from Aug 26.

Johor, Kedah, Melaka, Selangor, Wilayah Persekutuan Kuala Lumpur and Putrajaya were still in phase one whereas the remaining six states were in phase two.

Commenting further on the unemployment situation in August 2021, Mohd Uzir said the actively unemployed or those who were available for work and were actively seeking jobs encompassed 83.8 per cent of the total unemployed persons, and this group was reduced by 3.7 per cent to 627,500 persons from 651,300 persons in July 2021.

Out of the total actively unemployed, 53.8 per cent were unemployed for less than three months, while those who were in long-term unemployment of more than a year comprised of nine per cent, he said.

The inactively unemployed who believed that there were no jobs available decreased by 4.4 per cent month-on-month to register 121,300 persons from 126,900 persons in July 2021, he said.

Mohd Uzir said although the challenges would remain in the upcoming months due to the uncertain public health situation, the implementation of NRP has allowed for a safe reopening of the economy may partly navigate the country’s economy to progressively recover.

“The encouraging economic performance may increase labour demand including the creation of more job opportunities in the economy. Therefore, the reviving of the economy and the labour market is foreseen in stages in the forthcoming months,” he added.

WHO reviews AstraZeneca COVID-19 vaccine as more countries suspend use of...