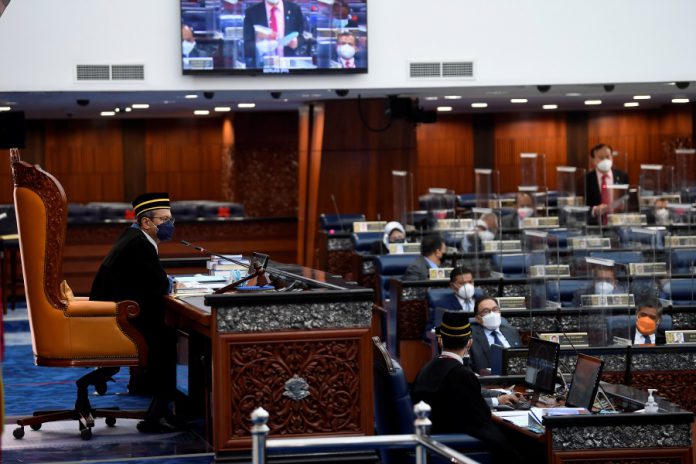 KUALA LUMPUR, Oct 11 — The First Meeting of the Fourth Session of the 14th Parliament which sat for 17 days, came to a close today.

The Dewan Rakyat session this time saw the tabling of the 12th Malaysia Plan (12MP) – the national development plan for the years 2021-2025 – approved after being debated over four days from Sept 28 by 106 MPs, followed by the winding-up sessions by the 27 ministries involved.

The 12MP was tabled by Prime Minister Datuk Seri Ismail Sabri Yaakob on Sept 27 with the aim of restoring the momentum of economic growth and achieving the country’s long-term development goals, as it faces the bitter challenges posed by the COVID-19 pandemic.

Earlier, the Dewan Rakyat approved the motion of thanks on the Yang di-Pertuan Agong’s Royal Address when opening the Fourth Session of the 14th Parliament on Sept 13, after 91 MPs took part in the debate.

The meeting this time also saw the passing of three Bills, the first being the Temporary Measures for Government Financing [Coronavirus Disease 2019 (Covid-19)] (Amendment) Bill 2021 to fund four aid and stimulus packages announced by the government since the beginning of the year.

At the beginning of today’s sitting, Minister in the Prime Minister’s Department (Parliament and Law) Datuk Seri Dr Wan Junaidi Tuanku Jaafar informed that the motion to debate and approve the resolution pursuant to Clause (3) of Article 150 of the Federal Constitution to repeal the Emergency Ordinances would be brought to the next meeting.

Wan Junaidi in a separate statement said the decision was made by Prime Minister Datuk Seri Ismail Sabri Yaakob following a request from the Opposition leader to postpone the tabling of the motion.

According to him, the application was filed to give more time for the motion to be debated by MPs before it was approved.

According to Parliament’s official website, the 32-day Second Meeting of the Parliament will begin on Oct 25, with the focus being the tabling of the Supply Bill (Budget) 2022 on Oct 29, the first budget under the Ismail Sabri-led government.

COVID: Prisons contribute over 50 per cent of cases in Sabah...