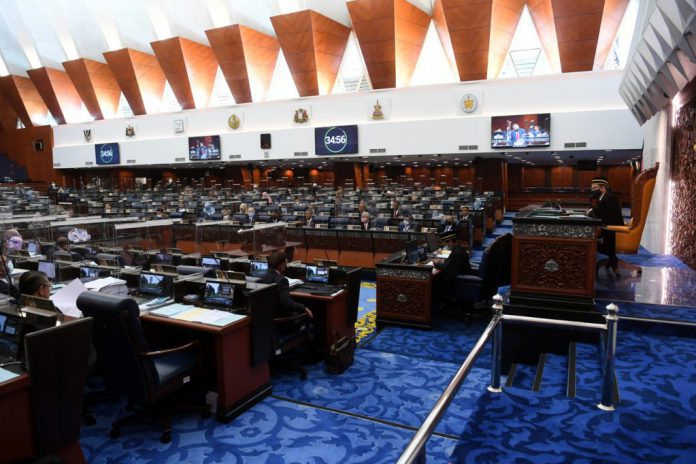 KUALA LUMPUR, Oct 25  — Several Members of Parliament (MP) who took part in the debate on the revocation of the Emergency Ordinances at Dewan Rakyat today questioned the ban on activities, assemblies, or social events for the Melaka state election (PRN)

Datuk Seri Ahmad Maslan (BN-Pontian) requested the government to relook the decision which came into effect today until Nov 27 by allowing short activities such as house-to-house visits.

“I myself as a member supporting the government, cannot accept that all election activities are not allowed.

“I am asking the government to review so that events such small ceramahs and house-to-house visits as well as small gatherings could be carried out,” he said.

Mohamad Sabu (PH-Kota Raja) when intercepting into the debate of Datuk Seri Saifuddin Nasution Ismail (PH-Kulim Bandar Bharu) questioned why such standard operating procedure (SOP) have to be created when Melaka is already in Phase Four of the National Recovery Plan.

“Restaurants are already full, malls are full, wedding feasts can be held, lectures are conducted but ceramahs cannot be held, house-to-house visit not allowed, campaign not allowed,” he said.

Nik Nazmi Nik Ahmad (PH-Setiawangsa) said the government and the Election Commission (EC) should be clearer on the double standard of not allowing any activities or social functions related to the election when it was conducted according to SOP which is tighter than the Sabah state election.

“If Perikatan Nasional, Barisan Nasional and Pakatan Harapan are contesting, it should be evenly provided. We as elected representatives are asking for this assurance and it should be a reference point when we move to the other elections in future,” he said.

For Steven Choong Shiau Yoon (Independent-Tebrau), he welcomed the government’s announcement to ban all activities and assemblies to reduce the risk of spreading infection as COVID-19 cases are rising.

He also proposed tight SOP for the state election, among them a ban on supporter assembly on nomination day set on Nov 8 and polling date on Nov 20 as well as reducing the number of voters at each polling centre at one time.

Yesterday, Health Minister Khairy Jamaluddin announced that apart from activities, assemblies and social functions, the organising of ceremonies to launch election machinery are also not allowed.

Based on monitoring by the Health Ministry (MOH), Khairy said among the contributors to the increase of COVID-19 cases and clusters in the country are linked to assemblies or social functions which did not comply with SOP.

The Dewan Rakyat will sit for 32 days until Dec 16.