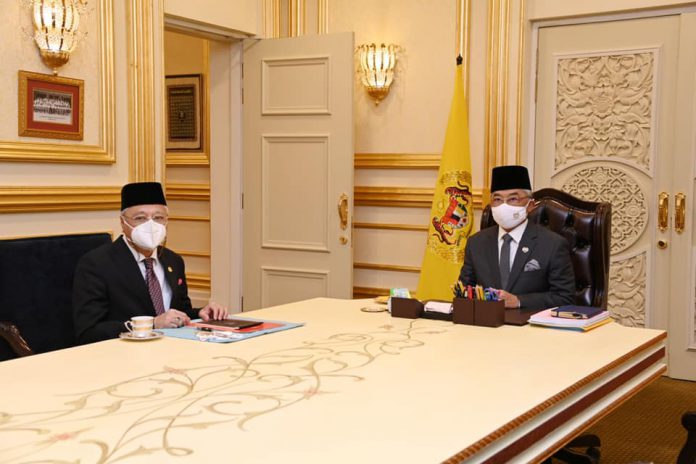 Grand Chamberlain of Istana Negara Datuk Azuan Effendy Zairakithnaini said the consent given by the King was in accordance with Article 40 and 40(1A) of the Federal Constitution.

“It must be clarified here that according to Section 2 of the Emergency (Essential Powers) (Sarawak) Ordinance 2021, the Emergency Proclamation can be lifted earlier by His Majesty upon discussion with the Yang Dipertua Negeri of Sarawak (Tun Pehin Sri Abdul Taib Mahmud),” he said in a statement here today.

The lifting of the Emergency Proclamation will indirectly pave the way for the 12th Sarawak state election after the term of the current State Legislative Assembly ended on June 6.

Azuan Effendy said Al-Sultan Abdullah gave the consent after granting an audience to Abdul Taib at Istana Negara yesterday to discuss the state’s application for the Emergency Proclamation to be lifted.

Earlier today, His Majesty also granted an audience to Prime Minister Datuk Seri Ismail Sabri Yaakob for a pre-Cabinet meeting, during which the latter also gave his advice pertaining to the lifting of the proclamation.

“Therefore, after considering the application from the Yang Dipertua Negeri of Sarawak, the advice from the Prime Minister, as well as the briefing given by the Attorney-General and opinions from the relevant heads of government agencies, His Majesty has consented to the Emergency Proclamation for Sarawak, to be lifted,” Azuan Effendy said.

“In His Majesty’s opinion, the country is still struggling with the threats of COVID-19 and the pandemic situation is still worrying.

“It is a complicated and difficult decision to make, but the King’s consent was granted to uphold democracy and return the power to the people to elect and form a new state government,” he said.

Nevertheless, he said the King stressed that the safety and wellbeing of the people should be given priority and placed above political and personal interests.

On July 31, Al-Sultan Abdullah declared the nationwide Emergency Proclamation to be extended in Sarawak until Feb 2 following threats of COVID-19, hence putting the state election on hold.

According to Clause (3) Article 21 of the State Constitution, the State Legislative Assembly should have been dissolved on June 7, but the Clause had no effect as Paragraph 15(1)(a) of the Emergency (Essential Powers) Ordinance 2021 has suspended the dissolution of the state assembly.

However, Section 2(2) of the Emergency (Essential Powers) (Sarawak) Ordinance 2021 promulgated following the Emergency Proclamation for Sarawak stated that the Yang di-Pertuan Agong can lift the proclamation earlier after discussion with the Yang Dipertua Negeri.