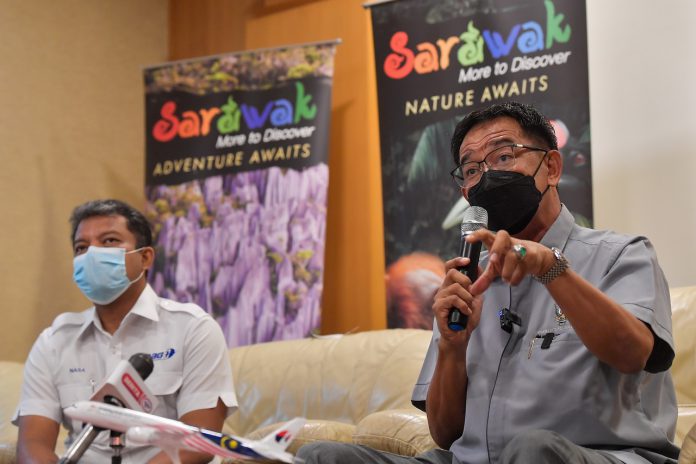 “The response was overwhelming and it has certainly helped the industry during this challenging time, (and) made our local visitors to know better about our own backyard. This proves that there is certainly a lot of potential for domestic tourism,” he said.

Speaking at a ceremony to welcome the arrival of Malaysia Airlines’ inaugural flight from Penang at Kuching International Airport today, he hoped the airline would collaborate with Sarawak in increasing its direct flights to the state.

“Connectivity has always been a challenge (in Sarawak), hence, Sarawak’s direct connectivity to Penang is very welcome. The connectivity and accessibility generate greater mobility that will drive the economic growth of both destinations,” he said.

Meanwhile, Malaysia Aviation Group, which operates Malaysia Airlines, in a statement for the occasion said its recommenced direct flights from Penang to Kuching and Kota Kinabalu beginning now to March next year were in response to the positive trend in demand for domestic travel.

Customers for these sectors can enjoy low fares starting from RM219 (Penang-Kota Kinabalu) and RM279 (Penang-Kuching).

“These routes will soon be served by the airline’s sister company, Firefly, from April 2022 onwards, resuming its jet operations based in Penang which were suspended since April 2021 due to the prolonged movement control order that resulted in poor demand,” it said.

Meanwhile, its other sister airline, MASwings, had been increasing its operation from Kuching to Miri to 12 times weekly and seven times weekly from Kota Kinabalu to Miri since Dec 1 to signify their commitment to improving air connectivity, especially to rural areas of Borneo.