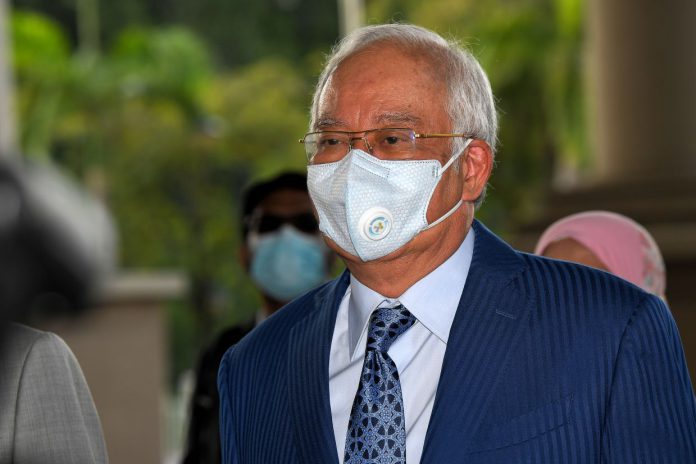 Najib, 68, is the first former prime minister in the country to be charged in court and sentenced to jail. His last avenue to appeal against today’s verdict is at the Federal Court.

The Appeals Court, however, allowed Najib’s application for a stay of execution of the sentence pending appeal to the Federal Court, which his lead counsel Tan Sri Muhammad Shafee Abdullah said would be filed today. The court also maintained the RM2 million bail fixed by the High Court.

Today’s proceeding was conducted via video-conferencing due to the fact that the Pekan MP and his defence counsels were casual contacts to Muhammad Shafee’s son, Muhammad Farhan, who was tested positive for COVID-19.

In a unanimous decision, Justice Abdul Karim said the court found that there was no error made by High Court Judge Mohd Nazlan Mohd Ghazali in calling for a prima facie case on all seven charges involving criminal breach of trust (CBT), money laundering and abuse of position against Najib.

For the charge of abuse of position, Justice Abdul Karim said the transfer of RM42 million from SRC International into Najib’s account was not classified as a national of interest.

“In the CBT cases, evidence showed that Najib, who was the then Prime Minister, had the power to hire and fire directors and the evidence also showed that directors in SRC followed Najib’s instructions,” he said.

Justice Abdul Karim further said that the bench also agreed that the offences were done in a purposeful manner.

He said the High Court Judge had correctly concluded that Najib was indeed a shadow director of SRC and was controlling SRC and it was also shown that the directors were appointed by Najib and that their appointment letters were signed by him.

“Najib was the directing mind of SRC and took charge of the company,” said Justice Abdul Karim adding that the evidence showed that Najib was directing and controlling the mind of SRC by virtue of being the then finance minister and prime minister as well as a director of SRC.

He said the panel also agreed that Najib did not act as Minister of Finance Incorporated’s (MoF Inc) sole shareholder when he micromanaged the company (SRC).

The judge further said Najib did not act in the scope of the MoF Inc representative but more like a shadow director of SRC who had a say in its day-to-day operations.

The  Kuala Lumpur High Court sentenced Najib to a total of 72 years in jail and fined him RM210 million after finding him guilty on all seven charges.

However, Najib will only serve 12 years in jail as High Court Judge Mohd Nazlan Mohd Ghazali ordered all the jail sentences to run concurrently.

Order to close schools which trigger clusters is to curb pandemic...