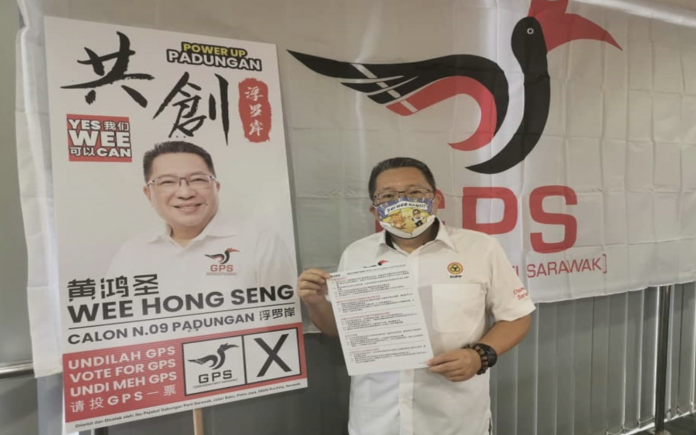 KUCHING, Dec 10 —  For Datuk Wee Hong Seng, who is taking on Sarawak DAP chief Chong Chieng Jen in the 12th state election, the fight for Padungan is a mission to “bring back the soul” to the old commercial district and tap on its rich history to make it attractive for tourists and businesses.

“The economic side is worrying. I have been moving around, and quite a lot of shophouses are closed. Once a business is boarded, it is a challenge to look for new business to come in,” he said.

The 59-year old Wee, a serving two-term mayor of Kuching South, made no mention of his main rival in the four-way tussle for the Padungan seat, when he unveiled a five-point manifesto today outlining his development agenda ”to return Padungan to its former glory” and to improve healthcare, safety and digital transformation plans.

On nomination day, Chong, who is also contesting Padungan for the first time, said Wee should not contest in the election and focused on being mayor instead.

Wee is one of two mayors nominated by the Sarawak United Peoples’ Party (SUPP), a component of the ruling Gabungan Parti Sarawak, this time. Padungan has been under the opposition for 15 years with DAP dominating the seat for the past two terms after PKR which won in 2006.

“I am not trying to be greedy, this is still within my reach. I can still contribute and this is not a one-man show either by a mayor or a Yang Berhormat. You must be able to gather a team for things to happen, if you count on one person, nothing can happen,” said Wee.

He said as a candidate, he had to seriously look into what can be done for voters and the future plans for the 92 per cent Chinese-dominated area.

”We cannot ask someone to vote for you if we do not have proper planning for their future. Based on the past, present and the future, let the voters select who they want. Let this election be clean and fair, in a gentleman’s way, and not by attacking each other,” he added.

Wee refuted the perception that in urban areas, the Chinese voter would vote for the opposition because their place would continue to receive development.

“I don’t think that is true. There is a difference between government and private development and in Padungan, there is not much private empty land left, no big piece of more than 10 acres. But there is still a lot of government land and we must come up with proposals and ideas to conserve the old heritage and also inject new life to bring the soul back to Padungan,” he added.

Wee is excited that Padungan can tap on Kuching city’s status as a UNESCO Creative City of Gastronomy awarded last month. It is the first Malaysian city bestowed the accolade.

He said Padungan used to have a vibrant nightlife but that has faded away. However, he sees several Sarawak brand cafes moving into the area and that would require security and public lighting to be improved.

Since Padungan fell into opposition hands, Wee is seen as the strongest candidate fielded by SUPP to wrest it back.