马中透视 MCI
Home Editor's Pick Government to give RM10,000 to next of kin of victim killed in... 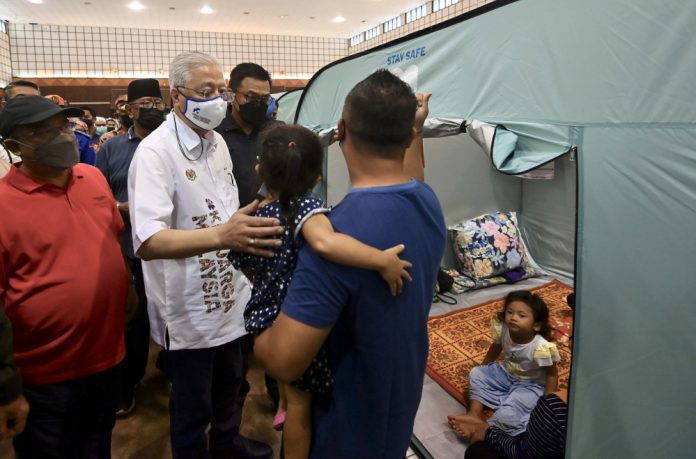 BENTONG, Dec 24 — The government will contribute RM10,000 to the next of kin of each victim who died in the current floods that hit the country.

Prime Minister Datuk Seri Ismail Sabri Yaakob said he would get the list of the names of those killed from the district disaster centre to ensure prompt delivery of the contribution to the affected next of kin.

“We are very sympathetic and saddened by what happened and we will provide some contribution…we will channel through the district office, which will hand it over to the next of kin of the victim concerned.

“It is learnt that the Pahang government is also providing RM5,000 to the next of kin of each victim killed in the floods,” ​​he told a press conference after visiting the flood victims at the relief centre (PPS) at Sekolah Kebangsaan Bukit Piatu here today.

Ismail Sabri said the government was also allocating RM50 million to Pahang and Selangor, which are the two states worst hit by the floods.

He said the Environment and Water Ministry (KASA) was also instructed to assist the two states to pump out stagnant water in the affected areas, including in Mentakab, Pahang.

KASA will also start work on straightening  of rivers and building a four-metre high embankment as early preparation in the event of a second wave of floods, he added.

Meanwhile, the prime minister has also instructed the National Disaster Management Agency (NADMA) to facilitate the disbursement of the RM1,000 assistance per household to those affected by the floods.

“I want NADMA to make immediate payment. Give directly to those who are at the PPS before they (flood victims) return home because the data is already there, there is no need to wait to fill in the form and so on,” he added.

According to Ismail Sabri, NADMA has so far, channeled funds of RM26.9 million to 11 states, including to those which had not been hit by floods  as an early preparation.

He said Bank Simpanan Nasional had increased its personal loan for flood victims to RM10,000 compared to RM5,000 previously to help them to replace essential household items that were destroyed in the floods.