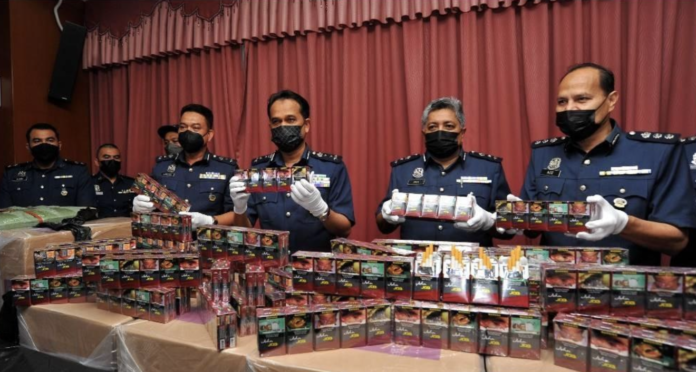 JOHOR BAHRU, Jan 9  — The Royal Malaysian Customs Department (JKDM) of Johor foiled an attempt to smuggle in cigarettes worth RM8.71 million including taxes after inspecting a container lorry, here, on Dec 28.

Its director, Sazali Mohamad said the seizure at Pasir Gudang port at 11.45 am was the result of information received and intelligence work by the Johor JKDM Pasir Gudang Enforcement Division.

He said the inspection on a lorry by JKDM found over seven million sticks of cigarettes suspected to be imported from China.

“The smugglers’ modus operandi was by making a false and deceptive declaration that the items (in the container) were cabinets and their accessories to avoid high tax and having an import permit,” he told a news conference, here, today.

He said a 43-year-old local man working with a shipping company was also detained to assist in the investigation.

On another case, Sazali said Johor JKDM also seized 600 bottles of zam-zam mineral water which were to be smuggled out when inspecting a lorry at the Sultan Abu Bakar Complex (KSAB), Gelang Patah, here, on Dec 30.

“The modus operandi was by making a false declaration of the zam-zam water in the Customs form. Samples of the water were sent to the Chemistry Department on Jan 2 to determine its genuineness,” he added.