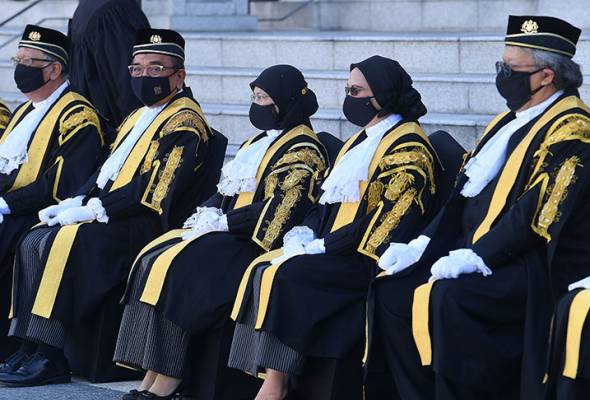 Tengku Maimun believes that the same can also be said for the other judges while stressing that all judges made decisions based on evidence presented in court and therefore will not be able to deviate from that principle.

“Yes, we heard over television how the former prime minister (Tan Sri Muhyiddin Yassin) was approached, but no one had ever approached me to seek such help (to interfere).

“But even if there was anyone who made an approach, we can say there is nothing that can be done as what happens in court is based on evidence and testimony,” she told a media conference after the opening of the Legal Year 2022 at the Palace of Justice here today.

She was asked to comment on the speech by Bar Council president AG Kalidas at the event today that touched on Muhyiddin’s address last year in which he (Muhyiddin) said he had received requests by certain parties to interfere in court decisions.

To a question about social media postings in relation to high profile court cases, such as the 1Malaysia Development Berhad (1MDB) trial faced by former prime minister Datuk Seri Najib Tun Razak, among others, Tengku Maimun said the public is entitled to voice their views but the judiciary will deliver verdicts in accordance with the principle of law.

“They want to tell the whole world about their side of the story. To us it doesn’t really matter because what matters is what evidence has been led to the court and that will be the basis of our decision in respect of those cases,” Tengku Maimun said.

Commenting on the same issue, Tengku Maimun said lawyers were also subject to contempt proceedings but it depends on their statements.

“Contempt proceedings are there to protect the image of the judiciary as an institution but we are also very clear that the proceedings be taken sparingly. As for the actions of the lawyers, they are also subject to the code of ethics for the lawyers under the Legal Profession Act,” she added.

Meanwhile, Tengku Maimun said decisions by the lower courts can be reviewed by the High Court if they were found to be excessive or unfitting according to existing laws.

She said the High Court can recall case records for review.

“It is therefore permissible under the law to recall case records based on its power to review lower court decisions,” Tengku Maimun said when asked to comment on the Selayang Magistrate’s Court decision yesterday to sentence a 19-year-old teenager to 10 days in jail and a fine of RM4,000 for attempting to steal a mosque donation box.

Magistrate Nik Mohd Fadli Nik Azlan had meted out the sentence on Daniel Iskandar after the accused pleaded guilty to the charge under Section 380 of the Penal Code.

The media previously reported about a one-minute-25 second viral video that showed members of the mosque bathing a man like a “corpse” for stealing a donation box.

Kuala Lumpur Convention Centre to host over 20 international events this...