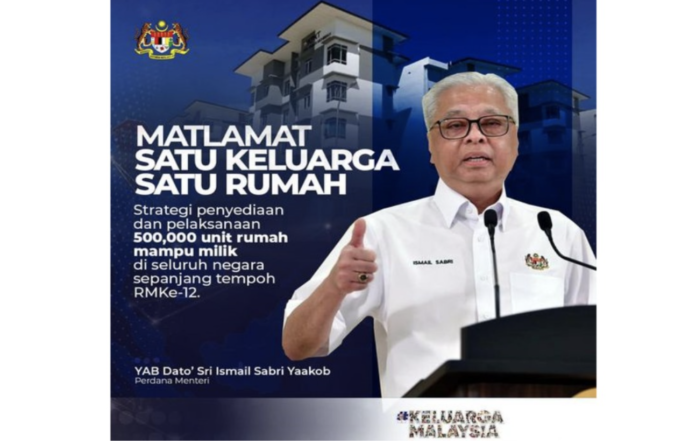 KUALA LUMPUR, Feb 10 — Bank Negara will need to review its financing model to make home ownership much easier for the B40 and M40 groups in line with the ‘One Family One Home’ target, Datuk Seri Ismail Sabri Yaakob said.

The prime minister said this was among decisions taken at the National Affordable Housing Council (MPMMN) meeting which he chaired today to discuss the direction taken and the coordination and monitoring of affordable housing plans nationwide under the campaign.

“This is to ensure financial institutions allow easier financing for the B40 and M40 groups to own People’s Housing Projects (PPR) units and other affordable homes. The focus will be on direct purchase and rent to own (options),” Ismail Sabri said in a statement today.

In addition, the prime minister said the Council today also agreed to set a new direction for PPR housing by taking into account current needs as well as including new components towards realising the ‘Liveable Malaysia’ agenda.

He said new PPR projects will look into elements such as connectivity and internet access, including ‘fibre to the home’ (FTTH), public transport network and designs that are more economical and comfortable.

“The government is committed to ensuring the provision of adequate and quality affordable housing to meet the needs of a growing population.

“As such, the Housing and Local Government Ministry (KPKT) has introduced the Home Ownership Programme (HOPE) to ensure a more comprehensive ecosystem for housing development and financing as well as programmes that can help Keluarga Malaysia (the Malaysian Family) own homes,” he said.

The prime minister said in addition, the government was also committed to having more affordable housing units for the younger generation as well developing affordable housing projects in the suburbs and smaller towns to allow more from the M40 group to own homes.

“The concerns from the meeting were the rising costs of construction material such as iron and steel as well as cartels controlling the construction industry.

In view of this, Ismail Sabri said KPKT and the Real Estate and Housing Developers’ Association Malaysia  (REHDA) have been directed to look into those concerns, adding that if they are traced to Approved Permits (AP), then the Council suggests that they are opened to all.

At the same time, the prime minister also urged all parties to play a role in ensuring the One Family One Home target is met.

To realise this, Ismail Sabri said the Federal Government will provide subsidies, state governments will allocate land and banks will provide easier home financing to ensure PPR and affordable homes are sold at reasonable prices.

The meeting today also heard presentations by the Khazanah Research Institute and Bank Negara on current data and other public housing issues as well as financing for affordable housing.

“The information will be used by the government to improve affordable housing strategies and strengthen related policies,” he said.

The MPMMN meeting, held virtually,  was also attended by menteris besar and chief ministers, the Chief Secretary to the Government and Bank Negara Governor Tan Sri Nor Shamsiah Mohd Yunus and housing industry representatives from the government and private sector.