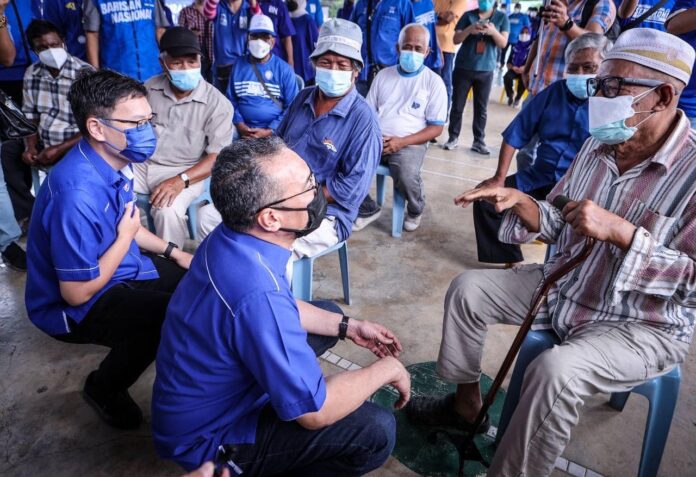 KLUANG, March 2 — Barisan Nasional (BN) treasurer-general Datuk Seri Hishammuddin Hussein has promised that the party’s victory in Paloh state constituency in the Johor polls will spur the growth of development programmes in the area.

Hishammuddin is confident that the BN candidate for the Paloh state seat, Lee Ting Han from MCA will be able to win the seat currently held by Pakatan Harapan (PH), with the help of UMNO and MIC as well as himself as Sembrong MP.

“In the Sembrong parliamentary, we do not go for skin colour but the strength that you have and I hope that strength is accepted by the people to ensure that our candidate wins,” he told reporters after an engagement session with Paloh constituents at Kampung Muhibbah Paloh here, today.

Hishammuddin, who is also UMNO treasurer, said he was relieved with the report submitted by the BN machinery, especially UMNO in showing their determination to win the state seat.

In the 14th general election (GE14), Sheik Umar who is also the Johor DAP vice-chairman won with a majority of 783 votes.

The constituents of Paloh state constituency comprise 47 per cent Malay voters,  Chinese (37 per cent), Indians (15 per cent) and Orang Asli (one per cent).

Hishammuddin also called on voters not to be influenced by the controversies, empty promises and negative campaigns carried out by certain parties on social media.

He said a meeting would be held with BN deputy chairman Datuk Seri Mohamad Hasan tonight to discuss the progress of the Johor polls campaign.

Hishammuddin’s visit to Paloh today was his first appearance after he contracted COVID-19 infection on Feb 22.