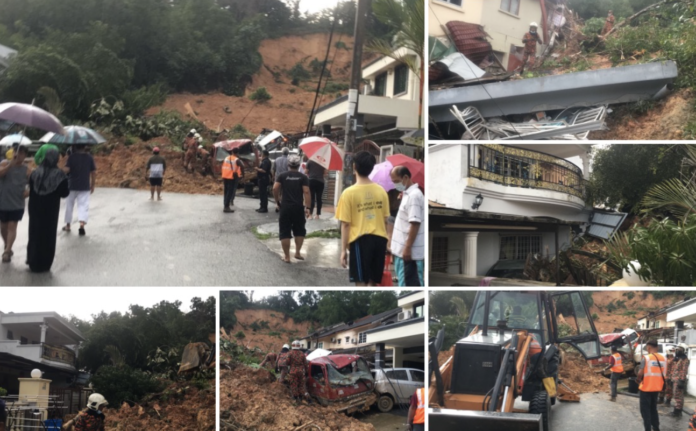 KUALA LUMPUR, March 10  — The following are landslides incidents nationwide since 2021.

Jan 3, 2021: A total of 14 stall operators in Kampung Geliga in Hulu Chukai, Kemaman, Terengganu were ordered to stop operations after a landslide occurred behind their premises.

Jan 5, 2021: Two houses in Taman Gambang Damai, Kuantan, Pahang collapsed, believed to have been triggered by soil movement as a result of continuous rain.

Jan 11, 2021: A total of 42 residents living in 12 houses at Jalan Bukit Kempas 1/4, Taman Bukit Kempas, Johor Bahru, Johor were ordered to vacate their homes after a landslide occurred in their housing area.

Jan 12, 2021: A 63-year-old grandmother and her daughter managed to escape with four of her grandchildren after parts of the home in Kampung Garung, Padawan, Sarawak were buried under rubble in a landslide.

In a separate incident, two houses were also damaged due to a landslide in Kampung Annah Sadir, Padawan.

Jan 15, 2021: Two districts in the southern part of Sarawak near the Malaysia-Indonesia border suffered power outages in Bau and Lundu after two reported landslides that cut electricity supply in Bau and Lundu.

Jan 20, 2021: A landslide occurred at KM 20 Jalan Tamparuli-Ranau, Sabah, about 90 km from Kota Kinabalu that involved the Taman Kinabalu car park, while the main road in Paitan, Beluran experienced a landslide due to continuous heavy rain that also affected the Paitan Water Department building.

Feb 17, 2021: A total of eight houses and a business premises were damaged when the riverbank near Dataran Air Muleh, Kampung Pohon Celagi, Pasir Mas in Kelantan collapsed.

July 17, 2021: A man died when the vehicle he was driving crashed into the rubble of a landslide in Jalan Haji Baki, Kuching, Sarawak.

Aug 18, 2021: Mudslides on the slopes of Gunung Jerai, Kedah due to a water surge phenomenon resulted in floods that claimed six lives.

In a separate incident, a woman and a child died in a landslide at Forest Hill, Penampang.

Sept 16, 2021: A woman died after her house was struck by a landslide in Sungai Palas, Cameron Highlands, Pahang.

Sept 17, 2021: Three bungalows and 16 townhouses involving 32 families were affected following a landslide at Jalan Kemensah Heights, Kuala Lumpur. There were no casualties.

Oct 1, 2021:Part of a retaining wall and a road in Lengkok Halia, Tanjung Bungah, Penang was hit by a landslide that caused a car parked in the area to plunge into the rubble.

Nov 22, 2021: A man was injured while three of his friends escaped unharmed after the car they were travelling in was hit by a fallen tree during a landslide in Tanah Rata, Cameron Highlands.

Dec 15, 2021: A man died after being buried in a landslide while mining gold in Kampung Air Sejuk, Kuala Terengganu.

Dec 26, 2021: A total of 128 occupants of the male hostel of the International Islamic University of Malaysia in Gombak were ordered to vacate the premises after a landslide and a sinkhole incident occurred near the building.

March 10, 2022: Five people were feared buried alive in a landslide that affected 15 houses and 10 vehicles in Taman Bukit Permai 2, Ampang.

Two agricommodity sector PPVINs to open in Selangor this month