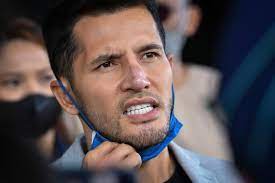 He arrived at the MCMC headquarters here at 9.58 am and left the building at 2.41 pm.

When met by reporters, Aliff Syukri said he apologised to those who were offended by the video and hoped that his family would not be dragged into this matter.

“Alhamdulillah, everything went smoothly. Thank you MCMC for treating me well. I apologised to all who were offended by my song and video,” he said.

The video clip, depicting a group of male dancers in make-up who display effeminate behaviour, has courted controversy as it was said to be unsuitable for public consumption, especially during Ramadan.

Yesterday, Communications and Multimedia Minister Tan Sri Annuar Musa said the MCMC had issued notices to individuals identified in the video to turn up at the commission’s headquarters.

He said MCMC’s preliminary study revealed that there are reasons for an investigation to be conducted and as such, an investigation paper has been opened under Section 233 of the Communications and Multimedia Act 1998.