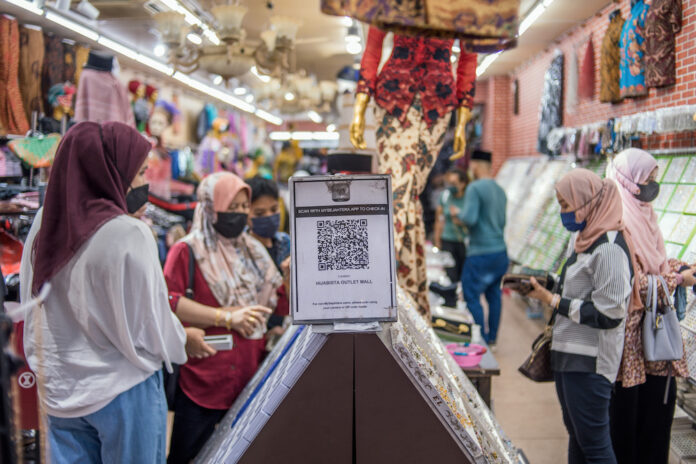 KUALA LUMPUR, May 1 — The wearing of face masks outside buildings and in open spaces is no longer compulsory beginning today but based on individual choice, but remains compulsory indoors and in public transportation, including e-hailing vehicles.

Also, the scanning of QR codes using the MySejahtera app as a standard operating procedure (SOP)  for registering entry into premises is no longer mandatory from today.

Checks by Bernama at several states indicated that most Malaysians chose to continue the SOP as before and were rather hesitant to stop the practice.

He was spending his Labour Day holiday with his wife and child at the park and said that they all chose to continue wearing face masks as they were already used to it.

In SELANGOR, checks at the farmers’ market in Section 13, Shah Alam revealed most visitors were wearing face mask in public and there were still some who were scanning QR codes using their MySejahtera app.

Ahmad Fakharudin Abdul Halim, 26, who was visiting the market, said he had forgotten all about the easing of the restrictions as it had been a compulsory measure for so long, adding that it was no longer a burden after two years of compliance. He noted that the easing of controls would bring relief to Malaysians as it showed that the country was on the path towards recovery.

Things were also the same in JOHOR, as the public were still wearing their face masks during checks at Larkin Sentral bus station.

Hasnah Ali, 74, and Mohd Yusoff Abdullah, 75, said when met there that it was important for them to wear face masks due to their age, a factor that might increase the risk of being infected by diseases.

In KELANTAN, a check at a bazaar held in an open area in Kota Bharu witnessed the public all masked up as they shopped.

Mohd Zulhafiz Rosman, 31, who was busy shopping for Raya, said although the government no longer mandated the wearing of face masks in open places, he would continue to wear it to protect himself.

In MELAKA, checks at a shopping mall in Ayer Keroh revealed yet the same situation and in PENANG, not only were the public wearing face masks, but business premises kept their MySejahtera QR code on display as well.

Grocery store owner Anwar Sadat, 42, said he would continue displaying the MySejahtera QR code for now as a precautionary measure.

“Whether customers want to scan or not, it’s up to them. I also make face masks compulsory in my store,” he added.