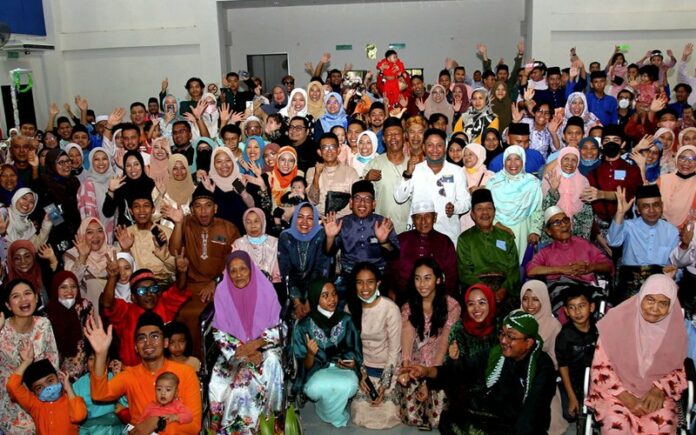 IPOH, May 3 — It was a meaningful Raya celebration for the descendants of Dukut Maharajo and Halijah Awang who gathered on a large scale involving six generations of the family in Kampung Kepayang today.

Over 1,000 family members and relatives were present, some even coming from the United States, United Kingdom, United Arab Emirates (UAE) and Indonesia to enliven the event.

Asyraaf Syahmie Hasri, 25, a university media relations officer said the programme was aimed at gathering all family members, and this was the 20th time it was held since 1980.

“This family gathering is usually held every two years to strengthen the bond among the various generations, and we have finally gathered now after four years (the event was last held in 2018) due to the COVID-19 pandemic,” he said when met by reporters at Dato’ Azumu Hall.

He explained, in a nutshell, that the lineage began when Dukut migrated to Malaysia from Indonesia in the late 1800s when he was 14 years old by boat to make a new living, and began selling traditional songkok from Indonesia and drinks in Chemor.

“Dukut was very pious, where he often prayed at Masjid India in Ipoh city centre, and that’s where he met Imam Awang, who suggested for him to marry his daughter, Halijah.

“They were blessed with eight children, namely four boys and four girls who formed the second generation in the family,” he said.

According to Asyraaf Syahmie – who is from the fifth generation – the belief of the descendants of Dukut is that if a person travels or migrates and does not achieve success, he could not return to his original place of dwelling.

He said although Dukut did not have an outstanding life, he was blessed with children and grandchildren who raised the good name of the family, such as the Datuk Paduka Maharaja Lela (Grand Chamberlain of the Royal Family and Household) Datuk Azuan Effendy Zairakithnaini, Youth and Sports Minister Datuk Ahmad Faizal Azumu and several other successful individuals.

Also present at the event were Dukut and Halijah’s grandchildren Mukhtar Mahmud, 86, Abu Bakar Saidin, 90 and Abdul Bari Ahmad 74, all of whom are close cousins of Ahmad Faizal, who is part of the fourth generation of the family.

Ahmad Faizal and his wife Datin Seri Dr Nomee Ashikin Mohammed Radzi when met said they were very grateful and happy to have had the opportunity to meet relatives from various generations, especially during Aidilfitri.

“I hope we can all continue to strengthen the bond among us, because, without our family, we are no one,” said Ahmad Faizal.

No durian glut in Penang this year – FAMA