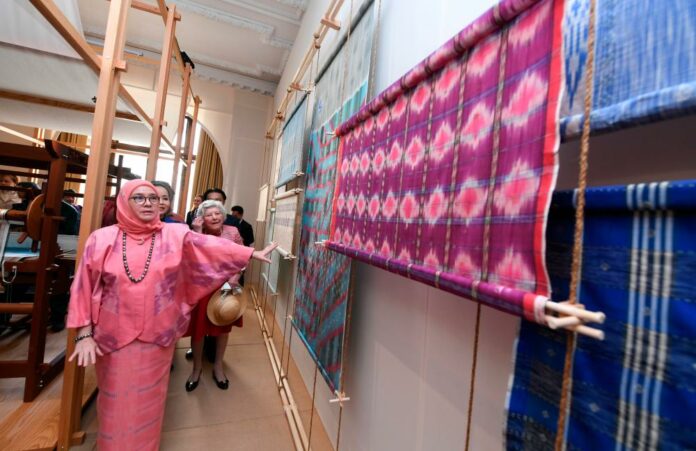 LONDON, May 9 — For the first time ever, the Royal Pahang Weave (Tenun Pahang Diraja) collection is being showcased to the world at the London Craft Week (LCW) from Monday till May 15.

Malaysia’s participation in the LCW this year is as one of the two curated Country Pavilions, reinforcing the festival as a platform for sharing global perspectives and shining a spotlight on London as an international hub for encountering outstanding makers and creativity from around the world.

The other Country Pavillion is Norway.

Led by Raja Permaisuri Agong Tunku Hajah Azizah Aminah Maimunah Iskandariah, the inaugural exhibition highlights the prison weaving programme; a display of a traditional floor-loom with a weaver at task; archival fabrics from the Pahang Museum and a selection of Tunku Azizah’s own garments and private tenun collection.

“It is all about weaving hope. The story itself is all about hope today… we hope to revive the weaving of Tenun Pahang,” said the Queen during the launching of the Royal Pahang Weave Exhibition at the Malaysian High Commission building in Belgrave Square, here.

“My hope is to revive the weaving (of Tenun Pahang) and for tenun to survive (it) will depend on the inmates. They are my hopes for the survival of tenun. They’ve enabled it to happen and because of them, there are now more than 200 weavers (compared to 15 in the state in 2006),” Tunku Azizah said.

Her Majesty also paid tribute to the Malaysian government and, in particular the Prisons Department, National Craft Institute and relevant departments for ‘giving hope and a second chance’ not only for the oldest weaving industry to survive but for the inmates to start a new life.

“(This is) one of the oldest weaving industries, at 1,000-years old, with the help of the Prisons Department and inmates, who designed and weaved.

“The smile on their face makes my heart melts. I treat them like a friend. Other than weaving, they were also thought how to cook and bake.

“The greatest hope is giving (them) hope to become a better person, skilled human being and rehabilitate them for social inclusion once they are released from prison,” said the Queen.

Prime Minister Datuk Seri Ismail Sabri Yaakob is scheduled to have an audience with Her Majesty and visit the LCW Tenun Pahang: Weaving Hope exhibition on Tuesday.

The prime minister, who is en route to Washington DC for the US-ASEAN Special Summit, is also scheduled to attend the Keluarga Malaysia Hari Raya Aidilfitri celebration with Malaysians living in the United Kingdom.

Tunku Azizah, who is also the Yayasan Tenun Pahang Diraja patron, said she was excited at the prospect of showcasing the centuries-old Pahang weaving tradition, which she described as “bringing the Penor and Bentong prisons (both in Pahang) to London”.

She said that she brought the textile pieces from the two prisons because she wanted the world to know about the work they do.

“We train them to be prepared for when they are released, for their sustainability.

“This is part of our preparations for the Perkampungan Al-Sultan Abdullah, which will be built in Pekan – a centre where all ex-prisoners can come to. We provide workshops to help them sell their goods,” she said.

Apart from showcasing textile pieces made by inmates from both prisons, the exhibition also includes the Pahang Museum’s archival fabrics and collection of Riau-Pahang baju kurung as well as 20 pieces of ‘samping’ (a type of sarong worn over trousers and usually from the waist to the knee level).

A former inmate, Md Ghafawi Mat Said, 52, will be on hand to demonstrate the art of weaving a 12 x 3.75 ft wall-hanging Tenun Pahang throughout the exhibition period.

The event is organised by Yayasan Tenun Pahang Diraja with the cooperation of the Foreign Ministry, Home Ministry, Prisons Department, Pahang Museum and Kraftangan Malaysia.

During the week-long festival, around 250 established and emerging makers, designers, brands and galleries from around the world will converge to showcase their products at the annual festival, held at various venues around London.

Umno-PPBM-PAS govt will be a disaster, says Dr M

MALAYSIANS FROM WUHAN ARRIVE AT KLIA