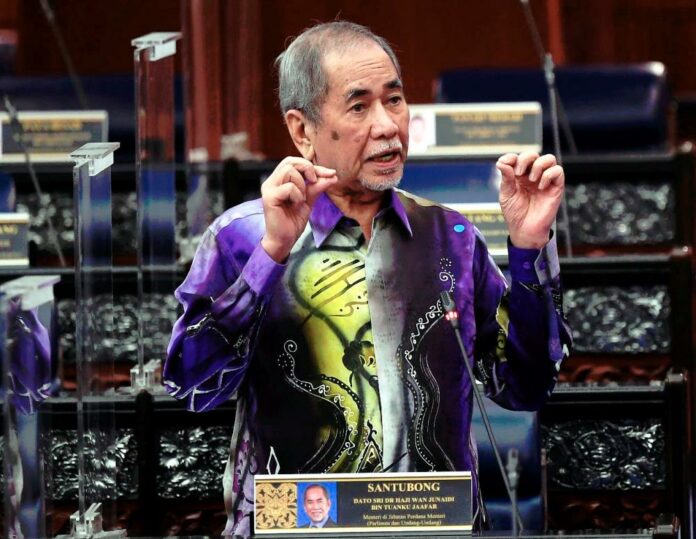 KUCHING, June 10 – The government has yet to set a timeframe for the abolition of the mandatory death penalty to take effect, Minister in the Prime Minister’s Department (Parliament and Law) Datuk Seri Dr Wan Junaidi Tuanku Jaafar said.

He said many areas need refining, including the proposal to set up a tribunal to study cases already served with the mandatory death sentence.

“In terms of constitutionality, this needs to be looked into by the AG’s (Attorney-General) side and (also) my ministry because if it contradicts the constitution, it cannot be implemented,” he told reporters here today.

He was elaborating on the media statement issued earlier in which the government agreed to abolish the mandatory death penalty and to grant judges discretion in sentencing.

In the statement, Wan Junaidi said the decision was reached after he presented the Report on Substitute Sentences for the Mandatory Death Penalty at the Cabinet meeting last Wednesday.

Wan Junaidi said in principle, the government accepted and took note of the recommendations of the Special Committee on Substitute Sentences for the Mandatory Death Penalty.

The Committee is led by former Chief Justice Tun Richard Malanjum and comprises legal experts such as a former Chief Judge of Malaya, a former Solicitor-General, legal practitioners, a law lecturer and a criminologist.

According to Wan Junaidi, several sections in the Act that provides for the mandatory death penalty, besides other relevant sections, also need to be further refined before the abolition can be implemented.

He further said that all current cases with mandatory death sentences that have yet to be decided by the courts will be postponed until the decision takes effect.

“All this must be studied in detail and also the types of punishment we need to introduce. That is my job now because the government has approved the reduction of these sentences,” he said, while also expressing hope that the decision will have the full backing of all parties.

He said the definition of the mandatory death penalty needed to be understood in which there were some Acts that did not give the courts the option to use their discretion to impose other sentences.

(With) the abolition of the mandatory death penalty, we now leave it to the discretion of the judges whether (to impose) the death penalty or some other punishment,” he said.