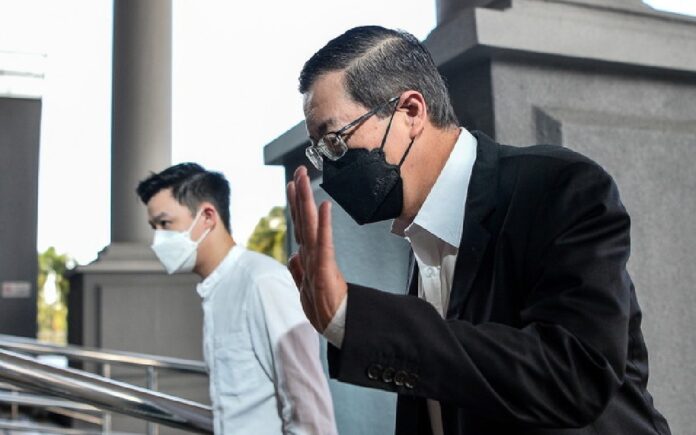 “Between 2012 and 2017, several payments were issued through two company accounts, Zenith Construction Sdn Bhd and Consortium Zenith BUCG Sdn Bhd and the payments were made to Datuk Zarul through cheques he cashed himself or by me (on his private instructions).

“The payments used falsified invoices and payment vouchers using both company names. Datuk Zarul issued instructions to obtain dummy invoices from several existing companies that were dormant for the purposes of using those invoices.

“Ibrahim Sahari and I looked for a middle man who could obtain such companies to procure these dummy invoices,” he said as he read his testimony at Lim’s corruption trial involving the three paired roads and undersea tunnel project worth RM6.3 billion in Penang.

Azli said in early 2014, he met with his acquaintance in Kuala Lumpur and sought their help for introductions to people who could obtain the dummy invoices and a middle man (whose name he had forgotten) was mentioned.

The 28th prosecution witness said the middle man then obtained the invoices from SBCS and BRE as well as from JKM Konsortium Sdn Bhd (JKMKSB) and Jurutera Konsult Maju Sdn Bhd (JKMSB) to serve as dummy invoices for the withdrawal of funds from CZCSB.

“Datuk Zarul would issue instructions to prepare cheques for this payments. All cheques would be prepared according to company financial processes and signed by two out of four of the authorised directors,” he said.

Azli said after Zarul was arrested by the Malaysian Anti-Corruption Agency (MACC) in mid-January 2018, Zarul confessed to him and Ibrahim Sahari that the payments using falsified invoices that he instructed were as bribe payments to Lim.

“His confession was a turning point that convinced me that those payments were indeed made because between 2012 and 2017, Datuk Zarul had ordered Ibrahim and I to use both documents to manipulate company accounts and cover the money trail.

“I confirm that whatever payment issued in invoices and payment vouchers of SBCS and BRE are fake payments and the details of the description for the Penang Road and Tunnel Project are illegal and was not implemented,” he said.

When cross-examined by Lim’s counsel, Gobind Singh Deo, Azli said he never met Lim personally and only met him during a Hari Raya event in Penang.

He also confirmed that the description in the invoices and payment vouchers were ordered by Zarul and although fake, the tunnel project was the only active project awarded to CZCSB by the Penang government led by Lim at that time.

Azli said, however, SBCS and BRE were unrelated and did not have any contracts with CZCSB and that he had bought and paid for the dummy invoices obtained from both companies by the middleman.

“I don’t know who owned both companies. What I wanted was those invoices. As I remember, the payment to obtain those dummy invoices was around RM10,000 to RM15,000 each time. I paid the middle man for the invoices in cash,” he said.

On invoices obtained from JKMKSB, the witness said he only knew that the company was owned by Datuk Dr Lee and Datuk Dr Shukri, who were CZCSB consultants, and he was informed by Zarul that Zarul was in control of the company.

When asked by Gobind whether he knew that the preparation of the documents (invoices and payment vouchers) were fake and was a crime, and that he was only following Zarul’s instructions, Azli replied, “Yes.”

In the second amended charge, Lim is accused of soliciting a bribe of 10 per cent of the profit from the company as gratification to secure the project.

Lim, a former DAP secretary-general, faced another two charges of causing two plots of land worth RM208.8 million, belonging to the Penang government, to be disposed of to two companies linked to the state’s undersea tunnel project.