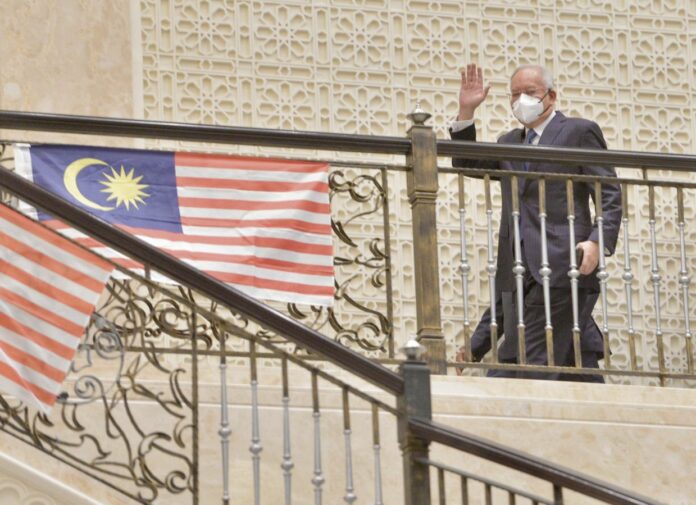 Najib’s lead counsel Hisyam Teh Poh Teik submitted that as a long-term former employee of Maybank, Mohd Nazlan’s previous conduct might also give ground for a reasonable person to believe that he cannot act with an objective mind.

Hisyam said this in his submission in the former prime minister’s motion to adduce new evidence in the SRC case in his bid to ultimately seek a retrial before a five-member panel chaired by Chief Justice Tun Tengku Maimun Tuan Mat.

The additional evidence Najib is seeking to adduce relates to the recent discovery that the trial judge (Mohd Nazlan) in 2006 was the general counsel and company secretary for Maybank Group, who had the ultimate overall responsibility for the management and administration of all legal departments within the entire group.

Citing a serious conflict of interest, the defence contended that the investigating authorities had suppressed or failed to disclose the materials which would have enabled Najib to raise the objection based on the trial judge’s conflict of interest at an earlier stage of the proceedings.

Hisyam also argued that the hearing of the appeal proper should be deferred until such a time that the investigation into Justice Mohd Nazlan’s role is completed.

The court was also told that the prosecution did not supply the evidence relating to judge Mohd Nazlan’s purported conflict of interest to the defence during the trial which was started in April 2019.

The lawyer said if not for the anonymous envelopes sent to Najib between May 9 and July 7, allegedly containing the fresh evidence, then the defence team would not have been aware of its existence.

He further said that his client was at the time unaware of judge Mohd Nazlan’s alleged knowledge and involvement in the establishment of SRC through his (Nazlan) then position as general counsel of Maybank Investment.

If Najib fails in this application, the Federal Court is expected to proceed with the hearing of Najib’s appeal against his conviction and sentence imposed on him by judge Mohd Nazlan on July 28, 2020.

Lead prosecutor Datuk V. Sithambaram will reply to the defence’s submission after lunch break. The court session resumed at 2 pm.