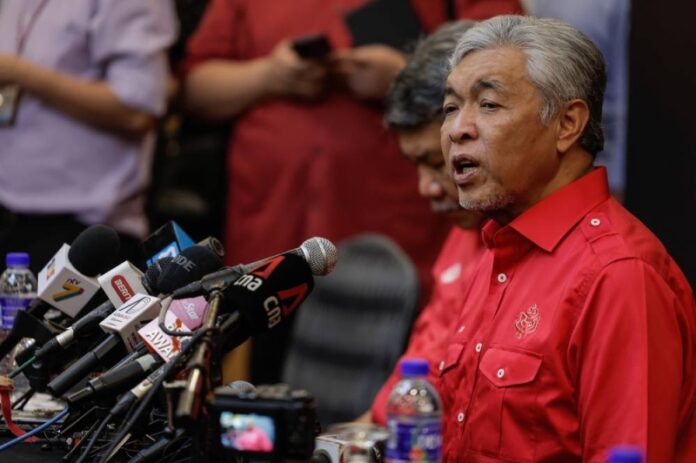 He said PAS needed to make a decision as soon as possible, otherwise, UMNO will go solo.

He said this at a media conference after attending a meeting with division chiefs and wing leaders at the World Trade Centre here today.

The over an hour-long meeting was attended by Prime Minister Datuk Seri Ismail Sabri Yaakob who is also the party’s vice president and joined by over 700 delegates involving 191 divisions from across the country.

Ahmad Zahid said that if PAS decides to join UMNO in GE15 and complies with the conditions set, it can use its own logo and Barisan Nasional (BN) will establish common machinery to face the election.

On Sunday, Ahmad Zahid said UMNO would only return to the negotiation table with PAS if the latter meets three conditions conveyed to PAS president Tan Sri Abdul Hadi Awang when they met recently.

Ahmad Zahid who is Bagan Datuk MP also said Gabungan Rakyat Sabah (GRS) has given the assurance during a recent discussion held with its leaders that the coalition will support all BN candidates in Sabah in the upcoming election.

“We really appreciate it and hope this matter can be realised meaningfully when the time comes,” he said.

Meanwhile, Ahmad Zahid said the application submitted by seven parties to join BN either as a core party or Friends of BN has been brought to the attention of the BN Supreme Council meeting.

“We are confident with the four core parties, eight coalition parties or Friends of BN and seven more parties that want to join BN,” he said.