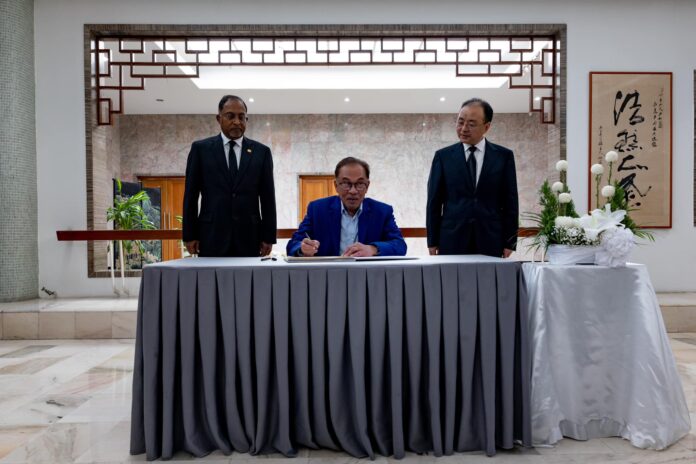 Anwar also signed the condolence book for the late Jiang Zemin and commended his achievements and contribution for playing an extraordinary role in navigating and strengthening China’s relations with Malaysia in particular and ASEAN in general during his tenure from 1993 to 2003.

“It is with great sorrow and sadness to hear about the passing of former President His Excellency Jiang Zemin.

“On behalf of the Government of Malaysia and its people, please accept our profound condolences and heartfelt sympathies to the government and people of the People’s Republic of China.

“He will always be remembered for his outstanding leadership and legacy during China’s reform, opening up and modernisation process.

“My thoughts and prayers are with the bereaved family of the late H. E Jiang Zemin as well as to the people of the People’s Republic of China, in this moment of loss of an outstanding statesman,” wrote the prime minister in the condolence book at the China Embassy here today.

Jiang Zemin passed away due to leukaemia and multiple organ failure in Shanghai at 12.13 pm on Nov 30, at the age of 96.

The state funeral will be held at the Great Hall of the People, Beijing, China today.