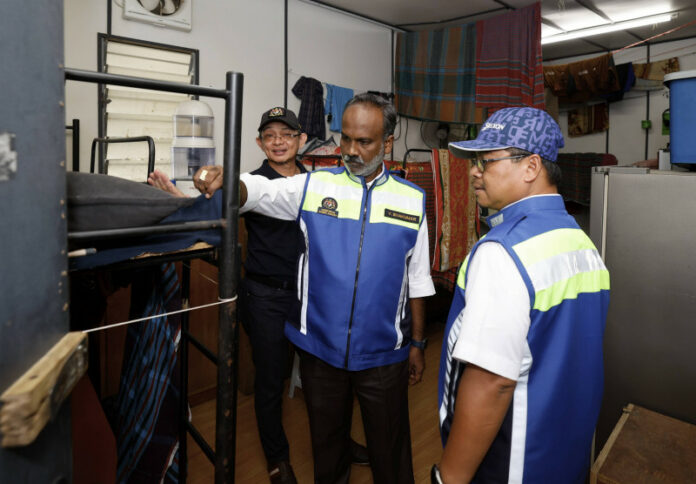 KLANG, Jan 25 — The Ministry of Human Resources has issued a warning to employers nationwide to ensure that the accommodation of foreign workers is always comfortable, and not like a buffalo or cattle pen.

Its Minister, V. Sivakumar said the conditions of foreign workers’ accommodation which are not in compliance with the stipulated conditions will endanger workers, particularly in the event of the COVID-19 pandemic and unwanted disasters.https://www.youtube.com/embed/N55PUrUEyGg?rel=0&showinfo=0

“We must treat them better. We are also being watched. Not only by the people (of this country) but also at the international level.

He said this after the special operation for the enforcement of the Workers’ Minimum Standards of Housing and Amenities Act 1990 (Act 446), at three wood and rubber products factories in Jalan Kapar, here today.

He also added that it had been found that among non-complying offences committed by employers were the failure to provide mattresses, poor cooking space and cramped rooms.

Also participating in the operation were his deputy, Mustapha Sakmud, and the ministry deputy secretary-general (Policy), A. Maniam.

Meanwhile, he said the owners of the three factories will be charged as soon as the investigation papers are complete and ready.

“The results of the inspection found that these employers committed a number of offences, including Section 24D of Act 446, and also offences under Regulations 3 and 4 of the same law.

“The employers were also found to have committed an offence under the law enforced by DOSH (Department of Occupational Safety and Health), and not contributing under SOCSO (Social Security Organisation),” he said.

He said the three factories operate with a foreign workforce of 526 people, from Nepal, Bangladesh and Myanmar.

When asked about amendments to the existing law, he said that the law was sufficient to ensure that employers take appropriate action.

“We will monitor more frequently from now on, to ensure that incoming foreign workers get a good placement, and are given due attention by employers,” he said.