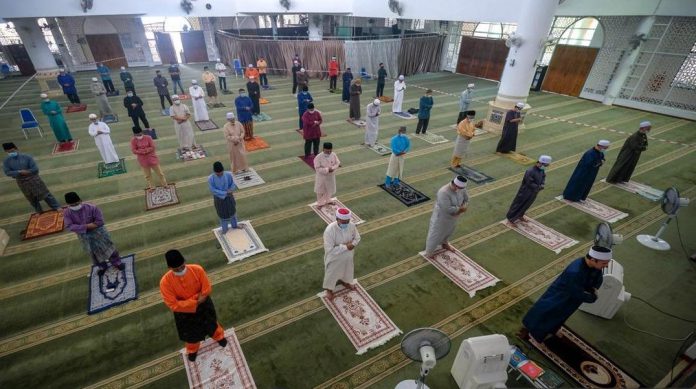 KUALA LUMPUR, June 13 — After nearly three months of being closed to the public, mosques and suraus in several states were reopened yesterday, allowing Muslims to perform Friday prayers and the daily congregational prayers.

Undoubtedly, this is a long-awaited moment when Muslims can now perform prayers in the mosques while practising the new normal by adhering to the standard operating procedures (SOPs) set to prevent the spread of COVID-19 among members of the congregation.

Prime Minister Tan Sri Muhyiddin Yassin, who had the opportunity to perform Friday prayers at the Saidina Umar Al-Khattab Mosque in Bukit Damansara, expressed his pride witnessing the law-abiding of the congregation during Friday prayers.

This included cooperating by queuing and following the movement in an orderly manner; recording their body temperature readings before entering the mosque, as well as bringing their own prayer mats and observing social distancing rules both inside and outside the mosque.

According to the SOPs issued, congregants also need to wear face masks in addition to performing ablutions at home, and no handshaking or physical contact is permitted while in mosques, Friday suraus and community suraus.

The mosque and surau committee members must play their part in ensuring that members of congregation in attendance will adhere to the SOPs.

In addition to self-discipline, good hygiene practices such as frequent hand washing are also important to ensure that no cases of the virus infection can occur among members of the congregation.

Although the number of COVID-19 positive cases has been steadily on the decline and the government has granted a lot of flexibility through the implementation of the Recovery Movement Control Order (RMCO) since Wednesday, it is not an excuse for us to let our guard down and take things lightly.

In addition to the permission to perform prayers at the mosques and the suraus, people can now travel across the country with many expected to travel to their hometown today and tomorrow to make up for the Aidilfitri celebrations that were spent apart under the Conditional Movement Control Order (CMCO).

Citing the words of Health director-general Datuk Dr Noor Hisham Abdullah, the country could only be declared free of COVID-19 if it recorded zero new cases for 28 consecutive days which is the length of two cycles of incubation of the virus infection.

Until we achieve that, we still have to continue the fight against this outbreak to realise the true meaning of a free and normal life as we know it.

Batu Puteh inquiry: Objection to Mohamed Apandi’s appointment should be made...

Perak UMNO not asking for Gerik by-election be held as it’s...