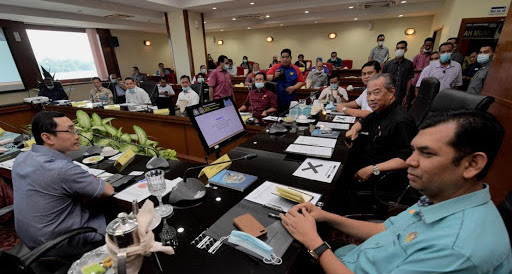 MUAR, June 28 — Prime Minister Tan Sri Muhyiddin Yassin today called on local authorities and government agencies to be more proactive by going to the ground to meet traders to get to know their problems.

He said the move should be taken to assist them restart their business after being affected by the COVID-19 pandemic.

“On this matter, there should be a different approach carried out so that the efforts by the government to regenerate the economy is successfully implemented.

“If before this, traders and operators have to refer to the district council, local authorities or chambers of commerce, now local authorities and government agencies need to go to the ground to meet traders to get to know their problems.

“This is also part of the new normal which government bodies must get used to as the way we work,” he said in a statement issued after he attended a meeting with representatives of Muar district traders and industries at the Muar district office here.

The Prime Minister stressed that Malaysia should not lag behind other countries in rehabilitating the economy more so when it is recognised as among the best countries in containing the spread of COVID-19.

Taking cognizance of this, the government had made firm and bold decisions to reopen various economic sectors in stages to ensure businesses and industries could resume their activities and restore their business.

“I would like to remind that there should not be unnecessary restrictions and obstacles on businesses which have been allowed to restart their operation, from carrying out their business.

“We must facilitate them. If they do not have licence, ease their application and expedite the approval process for them,” said the Pagoh MP.

Muhyiddin said the economic sector in many countries had been badly affected and Malaysia is not exempted from receiving the impact.

Earlier, at a closed-door session which lasted more than two hours, the Prime Minister held a dialogue with 37 representatives of trader and industry associations from Muar district at the Muar District Office.

The meeting was also attended by representatives of the Ministry of International Trade and Industry (MITI) , Finance Ministry LAKSANA unit, Health Ministry, Housing and Local Government Ministry and the Ministry of Domestic Trade and Consumer Affairs.

The meeting was held as Muar is Malaysia’s furniture hub occupying over 400 hectares in Bakri.

Apart from that, it also took into consideration that Muar is a popular food paradise with various tourist attractions.