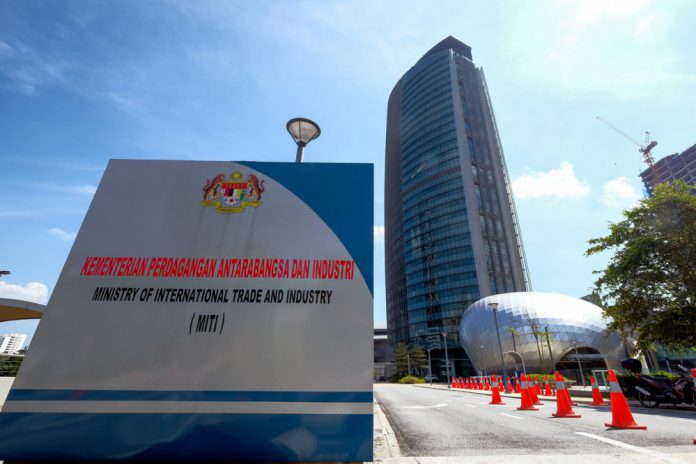 KUALA LUMPUR, June 7 — The Ministry of International Trade and Industry (MITI) will not compromise if any factories arbitrarily do as they like and violate the COVID-19 standard operating procedures (SOP) as prescribed by the government.

MITI and the Ministry of Domestic Trade and Consumer Affairs (KPDNHEP) are monitoring the situation and will continue to do so, as well as make surprise visits.

Based on the outcome of the MITI COVID-19 special task force today in Shah Alam, it was found that a factory was operating during the Movement Control Order (MCO 3.0) even though it was not listed as essential service.

“Suzuki Latex Industry Malaysia Sdn Bhd’s factory which produces finger sleeve has changed its sub-sector to electrical and electronics, however, MITI had detected its fake registration when they arrived at location,” MITI said when asked about the surprise visit today.

Hence, MITI said the factory had accepted the compound offer of RM50,000 and directed it to close for 14 days.

“The offer of maximum compound and notice of premise closure were immediately issued to the factories,” it added.

Meanwhile, Syarikat Barry Callebaut Malaysia Sdn Bhd was slapped with a compound of RM10,000 because its employees did not use the MySejahtera app at the point-of-entry into the premise.

“Three security guards and a supplier did not use the MySejahtera app. The company representative accepted the compound offer,” it said.

Syarikat Wistron Technology (M) Sdn Bhd in Klang, Selangor, which reopened on June 3, 2021 after it was directed to close previously, had fully complied with the SOP.

“Industry players are reminded to always adhere to the latest SOP issued by the National Security Council (NSC).”

The violation of the SOP not only put companies at risk of being compounded but could cause death if an individual contracted COVID-19.

For any complaints on the non-compliance of SOPs by factories, the public can submit their complaints to covid19aduan@miti.gov.my

Over 195,000 children in Malaysia fully vaccinated against COVID-19