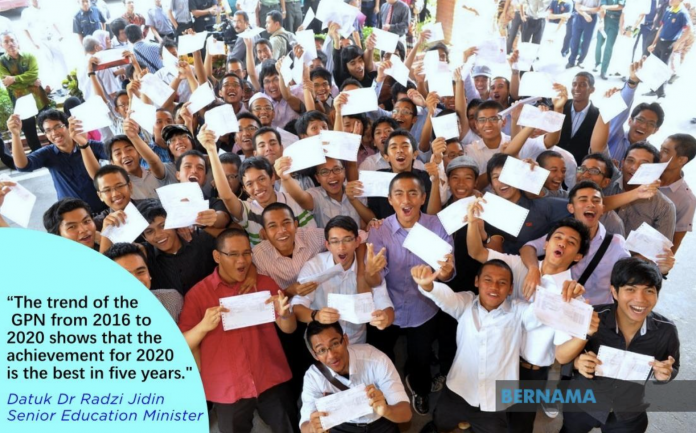 “These data show that candidates’ performance is better in 2020 compared with 2019. A smaller GPN value indicates better candidate achievement. This analysis is based on first-time SPM candidates who registered for a minimum of six subjects and sat for at least one subject.

Radzi said the achievement of students in urban and rural areas in 2020 had improved compared with 2019.

He also said that the results of the SPM 2020 showed that the performance of 43 out of 83 subjects had recorded an improved performance, 39 subjects recorded a decline while one subject remained the same.

“The performance of five core subjects – Mathematics, Science, History, Islamic Studies and Moral Education – has improved in 2020, while Bahasa Melayu and English subjects recorded a decline,” he said.

In the meantime, he said the percentage of candidates eligible to be awarded the SPM certificate also increased by 1.96 per cent, at 88.68 per cent, from 86.72 per cent in 2019.