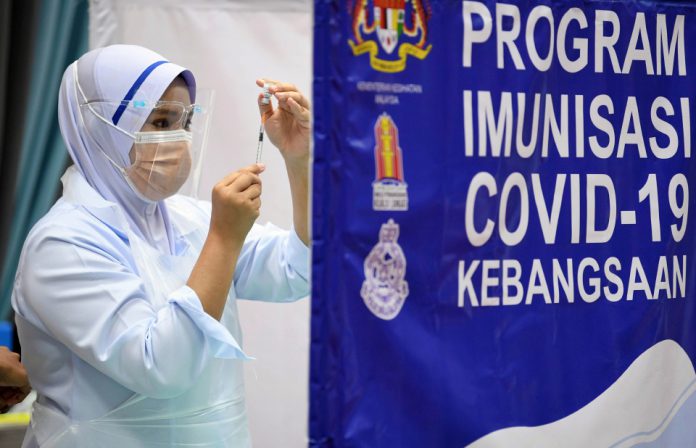 The prime minister said data from the Health Ministry (MoH) showed that more than 40 per cent of the adult population aged 18 and above in these states – Federal Territory of Labuan, Sarawak, Negeri Sembilan, Selangor, Kuala Lumpur and Putrajaya – had been fully vaccinated against COVID-19.

“Yesterday, no new COVID-19 cases were reported in Labuan for the first time.

“Data on hospitals issued by the Crisis Preparedness Response Centre (CPRC) shows that the situation at Emergency Departments in the Klang Valley has also improved,” he said in a statement today.

He said that on average, the number of patients waiting at the Emergency Department for admission to wards of MoH hospitals in Klang Valley states had also dropped.

On July 31, the average number of patients waiting at the Emergency Department was 909 but it dropped to 239 on Aug 13, due to the government’s thorough planning and MoH’s proper implementation of strategy as well as the impact of vaccination.

COVID-19 is a five-category disease, with category one being the mildest.

Muhyiddin said Health director-general Tan Sri Dr Noor Hisham Abdullah had said on Friday that the implementation of Operation Surge Capacity in the Klang Valley on July 26 had led to a drop in hospital admission rates for COVID-19 patients of all age groups.

The prime minister said the government, through the Greater Klang Valley Special Task Force (GKVSTF) and COVID-19 Immunisation Task Force (CITF), was doing its best to ease the situation in the Klang Valley.

He hoped that this downward trend would be sustained to reduce the burden posed by serious COVID-19 cases and admissions to the Intensive Care Unit (ICU), which require more difficult treatment and a longer stay in hospital compared to admissions to normal wards.

“As such, (all should) quickly register for vaccination, including pregnant women and teenagers in the age group approved by the (Special) Committee on Ensuring Access to Vaccine Supply.

“Employers should also play their role to ensure that their employees including foreign workers are vaccinated,” he added.

PICK was launched on Feb 24 to curb the COVID-19 pandemic, which hit the country early last year.

Hishammuddin, Vigneswaran to comply with health ministry’s decision on compounds

Emergency extension in Sarawak in line with state govt’s stand –...