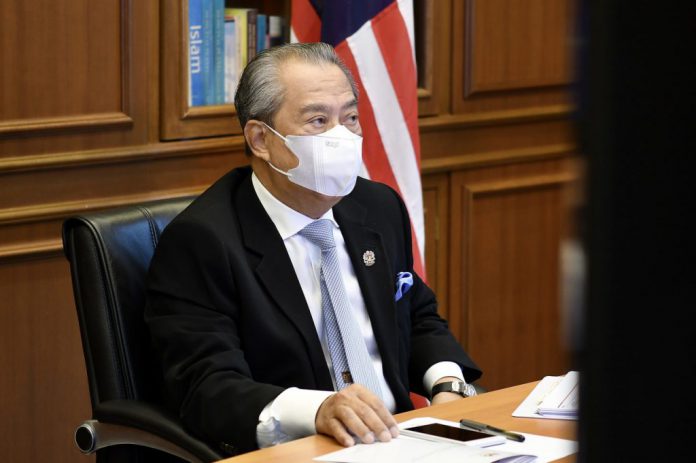 PUTRAJAYA, Aug 17 — Tan Sri Muhyiddin Yassin has made a pledge that even though he is no longer the prime minister, the tagline Kerajaan Prihatin (Caring Government) will stay with him and his friends from the previous Perikatan Government.

“The fact is I am no longer the prime minister, but I still care and will continue going to the ground (to meet the people)…because I know there are data showing that the poor in the country are increasing in number and this is very challenging,” he told senior media editors after announcing his resignation yesterday.

He said if looking at the performance assessment of the PN government, it did not fail but instead had done so well as admitted by many based on the efforts carried out in handling the COVID-19 pandemic.

Muhyiddin said he can now breathe a sigh of relief for having done what he should have done to help the people in facing the pandemic.

“Of course some may ask how I feel, whether I’m sad (about having to resign). To a certain extent, I think I could have done more if only I am still around as prime minister, I want to finish the whole thing till the very end to see what we have started would finish completely, though exhausted and tired or wary, I know my team and the civil servants had worked hard,” he said.

Muhyiddin also expressed hope that even without him and his Cabinet, the existing government officials would continue carrying out the task of helping the people to fight COVID-19 which has now shown some improvement.

“I have met with the senior civil servants, the armed forces, the police and the Attorney-General and discussed matters after I’m no longer the prime minister. They have promised to continue to help until the COVID-19 pandemic is over. I hope it will continue to be the focus and never be ignored.

“I feel responsible when I read about death and suicide cases. I don’t like that sort of thing to be put on my shoulder, but as the prime minister, I have to bear it,” he said.

He also hoped that the new government would continue the recovery process especially the existing recovery plan even though it would take some time.

Muhyiddin said he was aware that many had wanted this “Abah” to stay and not resign (as prime minister) but unfortunately, their wish could not be granted.

“Many ask me to stay, saying Abah please don’t resign, we love you, and so on. It’s very touching, I wish I could do that but under the parliamentary democracy, the post of Prime Minister is based on the provision in the Constitution. I took an oath…that I will uphold the country’s Constitution which accords the constitutional monarchy and so on,” he said.

Muhyiddin said he had performed all his duties in accordance with what is stipulated in the Constitution, including the provision which requires him to resign when he is no longer has the majority support in Parliament.

Elaborating, he admitted that the decision to resign had to be made due to the withdrawal of support from the Members of Parliaments, especially from UMNO.

“Not that I want to deny their rights as MPs, but it’s all politics. If the MPs care about the fate of the people during this tough time when many are affected by the pandemic and become poor, they will know that this is not the time for politics but to focus on saving lives and helping the people.

“Think about it, if they had something on their conscience, they will not celebrate it, because toppling me and my government while we are trying to do good to save and protect lives and livelihoods is not an honourable act,” he said.

“There are signs that made me think that it was done by certain parties for a specific purpose, but I do not want to make a statement that can be dragged to court. This political fact, I admit, may have such an effect, maybe their ambitions will succeed, but it’s okay, I accept it as fate,” he said.

Nevertheless, Muhyiddin also expressed hope that the new government would continue ensuring the wellbeing of the people amid COVID-19.

“The system we have built in the country is well secured, please maintain good relations and help the people…the government’s allocation in the budget must be spent, don’t let the people feel that they are being left out.

“I also hope the new government will continue our (existing) efforts and proceed with other steps that must be taken for the wellbeing of the people and the country,” he said, adding that he also prayed that Malaysia could rise again with rapid growth so that the people’s life could return to normal soon.