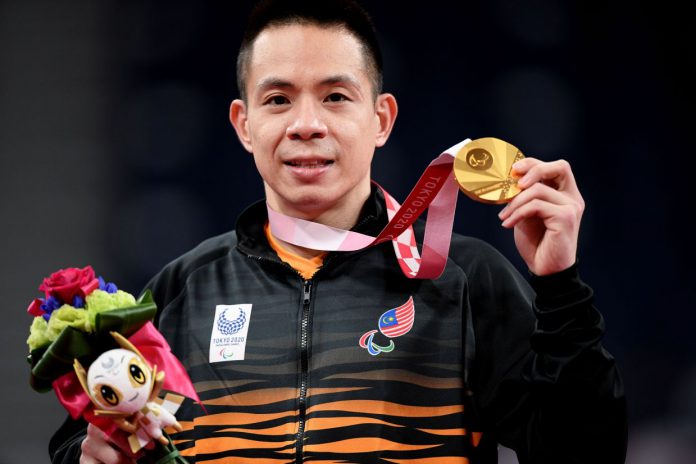 TOKYO, Sept 4 — Tokyo Paralympics gold medallist Cheah Liek Hou used to be teased and laughed at about his physical impairment during his younger days. But looks who’s laughing now!

It’s a testament to his determination and perseverance that the shuttler never let those negative remarks stop him from creating history in Malaysian sports.

Liek Hou made history when he became the first player ever to win the Paralympic gold in the men’s singles SU5 (physical impairment) category as badminton made its debut at the Tokyo Paralympics.

The world number two was in devastating form as he crushed his nemesis and Games favourite Anrimusthi Dheva of Indonesia 21-17, 21-15 in the final at the Yoyogi National Stadium today.

Looking back at the taunts he was subjected to, the 33-year-old Liek Hou admitted that he never let them affect him, adding that they only fired him up to prove that he could still be successful in life despite his physical shortcomings.

“Apart from playing in the para category, I used to compete against able-bodied players during my schooling days since I was 12 years old.

“At that time, there was a group of individuals who would tease and joke about how I wanted to play against able-bodied players when I couldn’t even win against the para athletes. But they never broke my spirit because I wanted to prove to them that I could do it,” he told Bernama today.

Liek Hou, who has won numerous titles including becoming the world champion six times, admitted that he almost quit the sport when he realised that badminton would not be contested at the Paralympics.

He said that it reached a stage where he even had to work as a marketing executive some time around 2015 and badminton became a part-time career.

Thankfully, badminton was included in the Tokyo Paralympics for the first time, leading Liek Hou to take the decision to focus fully on the sport, including making national badminton legend Datuk Rashid Sidek as his coach in 2019.

“Just imagine, when I was working, my weight went up to 92 kilogrammes (kg). But when I realised I had a chance to compete in the Paralympics, I resumed my training regime and my weight dropped by 20 kg,” he added.

Liek Hou, who was born with Erb’s Palsy that resulted in his right hand being weaker and less stable, said the long wait for badminton to be included in the Paralympics had been worth the wait, especially since he managed to contribute a gold medal to the country.

He dedicated the gold to all Malaysians, especially Rashid, his family, former coaches and friends.

Commenting on his performance in the final today, he said Rashid’s motivational and encouraging words managed to calm his nerves after admitting to feeling nervous during this morning’s semi-final.

“My coach told me to forget about the semi-final and to just focus on the final because he felt that Dheva, being the favourite, would be under more pressure. It worked wonders!” he said.