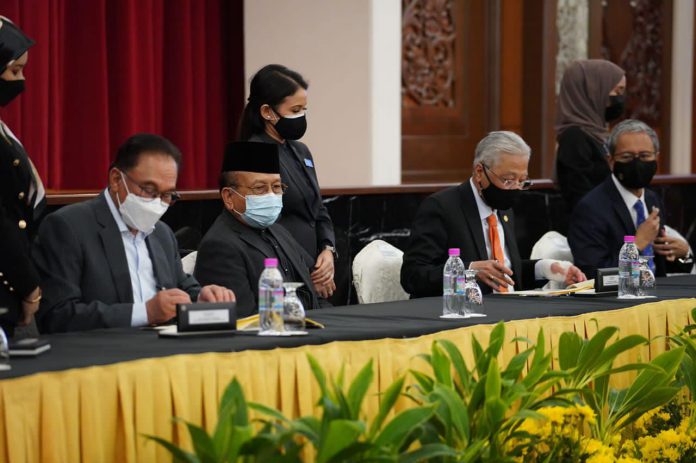 KUALA LUMPUR, Sept 13  — The political harmony that has been manifested through the signing of a historic memorandum of understanding (MOU) between the federal government and the opposition coalition Pakatan Harapan (PH) could spur economic confidence and increase foreign direct investments (FDI) to Malaysia, analysts said.

Juwai IQI chief economist Shan Saeed noted that investors have been entering Malaysian markets again due to rising political stability and the government’s commitment to put the economy on the path of growth.

“The federal government is totally committed to macroeconomic stability for growth which ushers in economic progression in the country. This move benefits the masses and the common man at the macro level,” he told Bernama.

The federal government and PH created history today by signing the MOU on political stability and transformation.

Prime Minister Datuk Seri Ismail Sabri Yaakob, in a statement, said the MOU to establish strong and effective bipartisan cooperation upholds the spirit of the Malaysian Family, in line with the command of the Yang di-Pertuan Agong Al-Sultan Abdullah Ri’ayatuddin Al-Mustafa Billah Shah.

The premier said the MOU will set aside political differences and ensure that the country’s recovery process be an inclusive one.

“The transformation introduced by the government will push for excellent governance in fighting COVID-19, economic recovery and act as a catalyst for a conducive investment climate,” he said.

Putra Business School associate professor Ahmed Razman Abdul Latiff reckons that the MoU will give the right signal to industry players and investors on the political stability in the country.

“This (action) has added confidence that the existing policies will continue to be implemented, as well as the deployment of new strategies and plans under the soon to be tabled 12th Malaysian Plan (RMK12) and Budget 2022,” he said.

Senior lecturer at Universiti Malaya Mohammad Tawfik Yaakub said a stable political environment will draw new foreign investors to Malaysia while the existing ones will strengthen their investments in the country.

“This will lead to the creation of more jobs and will give hope to the people, especially those who have lost their jobs,” he said.