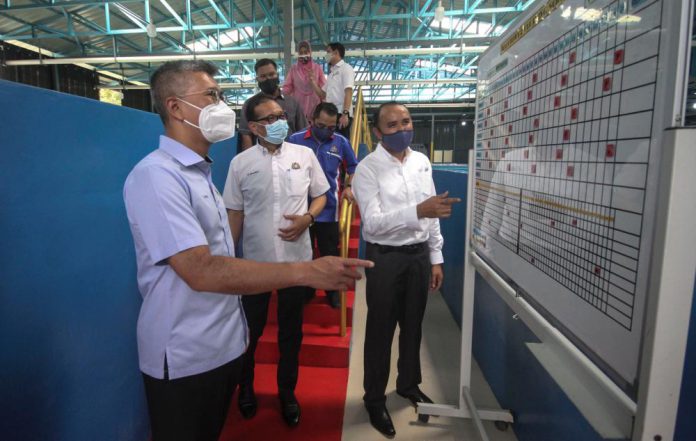 KULAI, Sept 18 — The Finance Ministry (MOF) will be studying the method to stabilise the rising prices of chicken so that it gives the best impact to consumers and breeders nationwide.

Finance Minister, Tengku Datuk Seri Zafrul Tengku Abdul Aziz said the effort would be carried out jointly with the Domestic Trade and Consumer Affairs Ministry (KPDNHEP) and the Ministry of Agriculture and Food Industries (MAFI).

“The government is aware of the soaring prices of chicken, nonetheless all decisions made should be seen from the impact to breeders and all parties involved as well as other industries in the food supply chain especially the impact to consumers which is the priority of the government.

“I also understand MAFI expects the rise in chicken prices to be temporary due to the uncertain demand in the market following the reopening of several economic sectors,” he told reporters after visiting a Kelah Breeding Centre at Asuko Genius Sdn Bhd here today.

Meanwhile, he said the provision of subsidies to chicken breeders and traders would be discussed earlier and for the time being no decision on the matter have been made.

On Sept 11, Deputy KPDNHEP Minister Datuk Rosol Wahid was reported as saying that a proposal would be submitted to MOF to provide subsidy to chicken farm operators in the country as a measure to control the price of chicken.

Rosol was quoted as saying that the spike in chicken prices now was reported to be due to higher prices of chicken feed namely soya bean and corn which are fully imported and that affected local chicken breeders.

In another development, Tengku Zafrul said Budget 2022 is expected to give focus to the agricultural industry and livestock breeding based on the existing potential and the objective to empower the food security initiative.

“Food security is seen as among the elements which was given importance in the Stimulation Package and Budget 2021. This time it would be given priority to build the foundation for improvement so that we are not too dependent on food import in the long run,” he said.

Tengku Zafrul said the alternative is to improve the agricultural industry which is seen as a continuation of the budget in the previous years apart from allocation spent.

“On the overall, in the stimulation packages and Budget 2021, RM3.15 billion was allocated to the agricultural sector and RM1.75 billion was successfully channelled to farmers, breeders and fishermen for projects related to agriculture.

“The projects implemented included those linked to current logistics during the Movement Control Order (MCO), micro credit facilities under Agrobank and state projects including the state of Johor,” he said.

Earlier, during the visit, Tengku Zafrul was excited in seeing the existing potential in Johor in raising the agricultural industry as a major sector churning the economy of the country.