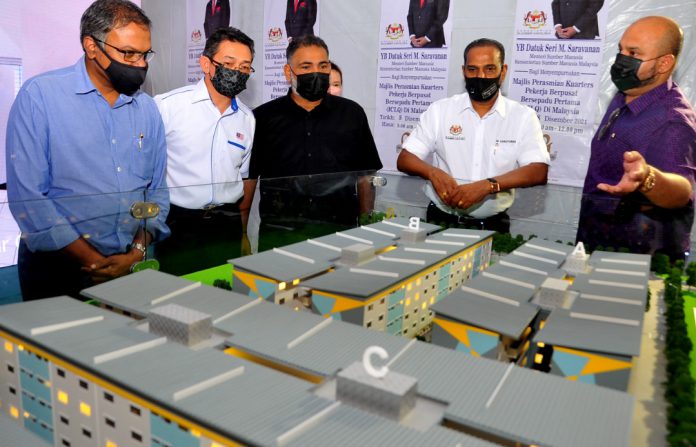 Human Resource Minister Datuk Seri M. Saravanan said the number included workers who would work in the construction and manufacturing sectors and as domestic maids (PDI).

“I have proposed 5,000 to 10,000 at the initial stage after we have signed a memorandum of understanding (MoU) between Malaysia and Indonesia, with workers for all other sectors also to be allowed in,” he told a press conference after launching the Integrated Centralised Labour Quarters (ICLQ) in Pasir Gudang, here, today.

Saravanan said a Special Committee under the Manpower Department would be set up in the near future to protect the fate of PDI employees.

“This is a government initiative after the discussions held and we have agreed to protect the Indonesian workers, so it is our responsibility to set up a committee to fulfil our promise,” he added.

Saravanan said Indonesia had also requested that Malaysia set a minimum wage for its citizens working in this country at RM1,500 per month.

“But I informed that we could not set the RM1,500 salary as our country is still enforcing the minimum salary of RM1,200 per month.

“However, I have agreed that the salary starts from RM1,200…meaning that if an employer is willing to pay RM1,500 a month, the government has no objection,” he said, adding that his ministry would discuss with Bangladesh on hiring workers from that country after completing the MoU with Indonesia,” he added.

Yesterday, it was reported that through Saravanan’s meeting with his counterpart, Ida Fauziyah in Indonesia, Malaysia and Indonesia agreed to implement the concept of ‘one maid, one task’  for a household of no more than six people.

In this regard, the Malaysia-Indonesia Technical Committee Meeting on the PDI Recruitment and Placement MoU will be held on Dec 14 to fine-tune the matter and to enable both parties to reach an agreement so that the PDI MoU can be signed as early as in January 2022.

Earlier, Saravanan in his speech said the 4,046-hectare ICLQ, the first in the country, could accommodate 16,000 foreign workers and it was designed according to the Global Workers’ Accommodation Safety Standards.

He also reminded all employers in the country to comply with the Minimum Standards of Housing, Accommodations and Amenities Act 1990 (Act 446) by providing comfortable accommodation for their workers.

Saravanan also slammed irresponsible employers who did not care for the welfare of their workers including not providing comfortable accommodation.

“Recently, I visited a factory that produces gloves, the returns amount to millions or billions but it provided poor accommodation for its foreign workers, with the beds only the size of a coffin, imagine that.

“I have to admit that the image of our country has been tarnished at the international level due to irresponsible employers like this. The Ministry of Human Resources will take stern action against such employers,” he said.

Viral message on abduction of children for their organs untrue –...