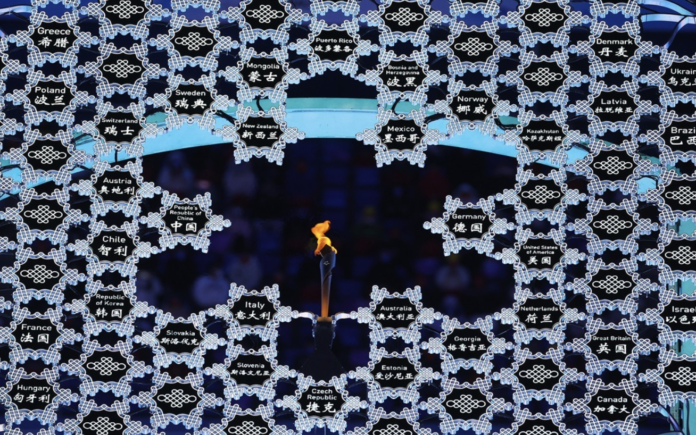 BEIJING, March 5 — Less than two weeks after the closing of the Beijing Winter Olympics, China’s iconic National Stadium burst into the limelight again as the Paralympic Winter Games opened on Friday night with a ceremony highlighting accessibility and inclusion.

Under the theme of “Improve, Go Beyond, Together,” which is inspired by an ancient Chinese saying “One should aim to improve oneself as long as the days go by,” the opening ceremony featured performers from all walks of life as individuals with and without disabilities came together to welcome friends from all over the world.

The one-and-a-half-hour-long ceremony reached its climax when Li Duan, Paralympic long jump and triple jump champion at Athens 2004 and Beijing 2008, placed the Paralympic torch in the middle of a giant snowflake-shaped cauldron which later ascended to the top of the stadium.

Belgium led the parade of athletes of 46 National Paralympic Committees (NOCs), as hosts China marched into the stadium last behind Italy, the hosts of the 2026 Winter Games, with Guo Yujie and Wang Zhidong holding the Chinese national flag together.

“In 2008, Beijing delivered a high-standard Paralympic Games with distinctive features. Today, 14 years on, Beijing is again the centre stage of the Paralympic Movement — this time in partnership with Zhangjiakou.

“Our goal is to achieve ‘Two Games, Equal Splendour’ and present a streamlined, safe and splendid Paralympic Winter Games for the world,” he added.

International Paralympic Committee president Andrew Parsons expressed his gratitude towards the Chinese organisers in his address.

“Change start with sport. Not only can it bring harmony, but it can be a catalyst to transforming the lives of people, cities and countries.

“As the first city to stage both the Summer and Winter Paralympics, Beijing is proof of this,” said Parsons.

The Paralympics will see over 500 athletes from 46 countries and regions compete for medals in 78 events until March 13.

Those who travelled interstate not allowed to join Aidiladha prayers in...