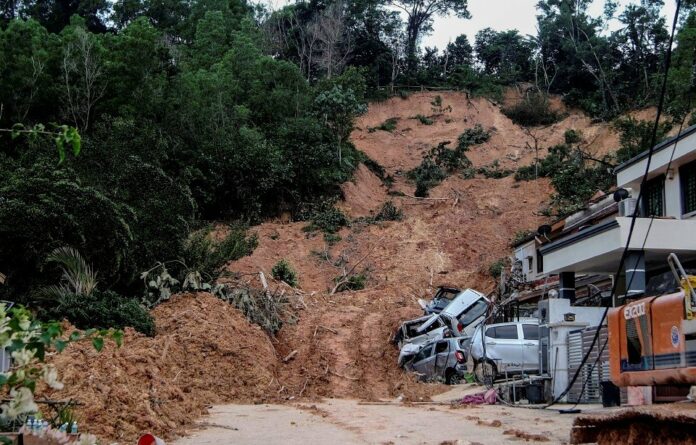 KUALA LUMPUR, March 12 — Residents living near slopes or hilly areas need to be exposed to knowledge and ways to to identify early landslide indications in their housing areas to reduce the risk of fatalities.

Geology Engineering and Soil Mechanics expert, Dr Nor Shahidah Mohd Nazer said lately environmental disasters are no longer occurring during their season due to climate change and there were several episodes of flash floods and landslides as a result.

“A landslide is unlike a flood as floodwater rises slowly, but there is not much time, when the final indicator of a landslide appears…the time for residents to save themselves is very short, not even one minute.

“Among the indicators which should be given attention is the fast discharge of water on the surface of the slope, sometimes there is erosion on the slope which shows the path of water flow, some areas could start to rupture causing trees to topple as their roots are no longer holding to the ground,” she told Bernama here.

The Universiti Kebangsaan Malaysia Earth Science and Environment Department senior lecturer said the people should also use Google Earth website to see the topography changes on images of open surfaces on slopes which landslides may occur.

“These signs are frequently the closest indicators of an impending landslide, such information can be channel to the authorities for further action. If there are signs of instability, stay away from the site, at least five to 10 metres away,” she said.

She said residents living near slopes are advised to be alert during heavy rain as continuous rain is among the elements that led to water retention until the slope loses its stability leading to a slope failure or landslide.

Commenting in the landslide at Taman Bukit Permai 2, Ampang which took four lives apart from causing damage to 15 houses and 10 vehicles, Nor Shahidah said Ampang is known as an area that is very prone to land failure due to the elements of land exploitation.

“Without a buffer zone, such areas have high risk of soil movement which could slide down to bury houses more so when the slope is made up active clay.

“In my view, the landslide area in Bukit Permai is of an active clay type where the water content seeps over a wide area, leading to the slope failure.

She added that there should be slope maintenance every five years regardless of whether there are forms of failures due to climate and atmospheric changes as well as hot and cold weather.

“Depending on the types of maintenance or mitigation structures, slopes should be checked in eight to 10 years as landslides are a dynamic process, a natural process, what we can do is to minimise the impact of the landslide itself by slope maintenance on slopes that have failed or have the potential to fail, ” she said.

Nor Shahidah said there is also a need to install an inclinometer in residential areas in highlands to reduce the risk of off season floods and landslides.

On the level of preparedness to face worst natural disasters, Nor Shahidah said based on the feedback provided to rescue teams or authorities during a natural disaster, shows the country is prepared for worst situations even though some areas could be improved.

“For example, in the landslide, rescue teams giving assistance should have the knowledge on the nature of soil so as not to trigger a series of soil movements when rescuing victims which may harm rescuers themselves.

“The rescue team is not merely to save victims but he should also know and understand the characteristics of soil and the type of aid to be given and not just by resorting to digging which may lead to further soil movements,” she said.

She also said local authorities or government need to formulate the methods of stabilising slopes and study the element of soil thoroughly.

“What we usually give is fire training from school to occupational training…countries such as Indonesia, Philippines, Japan and other neighbouring countries are more prepared, in Malaysia the people are more relax as we are not exposed to such dangers especially earthquakes.

He said there were also cases where residents refused to evacuate during a flood when ordered by the authorities and therefore the government has to play a role by providing education and exposure on the initial steps in dealing with natural disasters.

Malaysian MNOs can potentially save RM30 bln over 10 years with...

Compensation of employees contributes 34.8 pct to the nominal GDP, says...