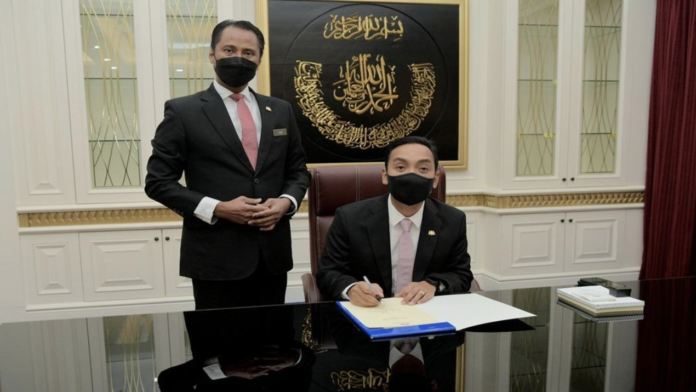 The 19th Johor Menteri Besar arrived in a vehicle at the compound of the state administrative building at 10.05 am and was received by State Secretary Datuk Azmi Rohani.

A prayer was said before Onn Hafiz, dressed in an all-black suit, entered his office at Level 4 and signed a letter to signify his first day at work.

The Machap state assemblyman was sworn in as the new Menteri Besar before the Sultan of Johor, Sultan Ibrahim Almarhum Sultan Iskandar, at Balai Mengadap (Audience Hall) of Istana Bukit Serene in Johor Bahru yesterday.

In the Johor state election on Saturday, Onn Hafiz, 43, won the Machap seat by a 6,543-vote majority in a four-cornered contest against Azlisham Azahar of Perikatan Nasional, R. Sangaran of the Malaysian United Democratic Alliance and Datuk Dr Sharuddin Md Salleh of Parti Pejuang Tanah Air.

Barisan Nasional formed the state government after winning the polls with more than a two-thirds majority, capturing 40 of the 56 seats contested.

Mahathir will give Warisan a headache, academic warns