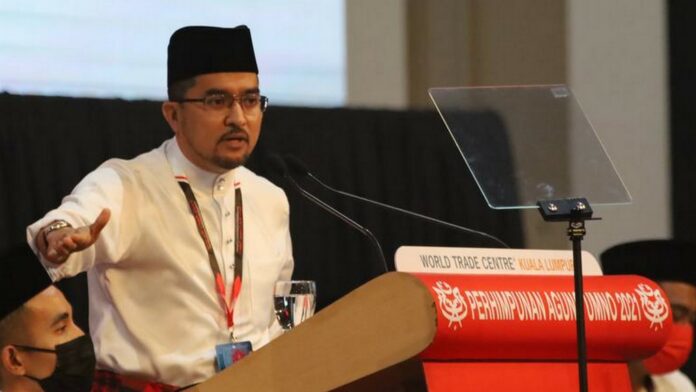 KUALA LUMPUR, March 17 — UMNO Youth hopes that the government can expedite the tabling of a law on political funding to ensure that parties report their financial resources transparently.

Its chief Datuk Dr Asyraf Wajdi Dusuki said the law would also help ensure that there was no element of corruption or abuse of power in political parties.

He said the transformation agenda brought about by UMNO Youth today was aimed at ‘cleaning up’ the political culture, preserving the democratic system, defending the people’s mandate as well as instilling hatred of corruption and hypocrisy which could undermine the integrity and moral values.

Integrity was among the main criteria that the younger generation would consider when choosing leaders, he said when delivering his speech at the UMNO Youth Assembly 2021 at the World Trade Centre (WTC) Kuala Lumpur, here today.

The Youth wing also proposed that the party’s constitution be amended to enable the party elections to be held after a general election to avoid any attempt to sabotage or undermine the unity of the party.

Asyraf Wajdi said UMNO Youth also wanted the anti-party hopping act to be debated and passed immediately in Parliament to regain the trust of the people towards the country’s democratic system.

“The country’s fate should be decided by the people, not by the ‘222 political elites’ in the Dewan Rakyat,” he said.

Asyraf Wajdi also touched on the separation of the roles of the Attorney-General and the public prosecutor to avoid a conflict of interests and selective prosecution.

“An Attorney-General that is appointed on the advice of the prime minister should not be advising the government and at the same time using his powers to prosecute,” he said.

Meanwhile, Puteri UMNO chief Datuk Zahida Zarik Khan, in her policy speech in conjunction with the wing’s General Assembly 2021, said UMNO and Barisan Nasional’s (BN) victory in the Melaka and Johor state elections recently would serve as the best ‘tonic’ for the party.

“We have come out stronger in Johor and Insya-Allah UMNO will come back stronger nationwide. It is sweet victory for us because the current political war requires us to remain united and most importantly a lot of sacrifices,” she said.

Meanwhile, UMNO deputy president Datuk Seri Mohamad Hasan when met said the UMNO Youth’s proposal to remove the function of the public prosecutor from the role of the Attorney-General needed to be refined.

He said many countries had implemented such approach because it was transparent and able to facilitate the duties of the Attorney -General.

60.9 per cent of Penang’s population have received COVID-19 vaccine booster...