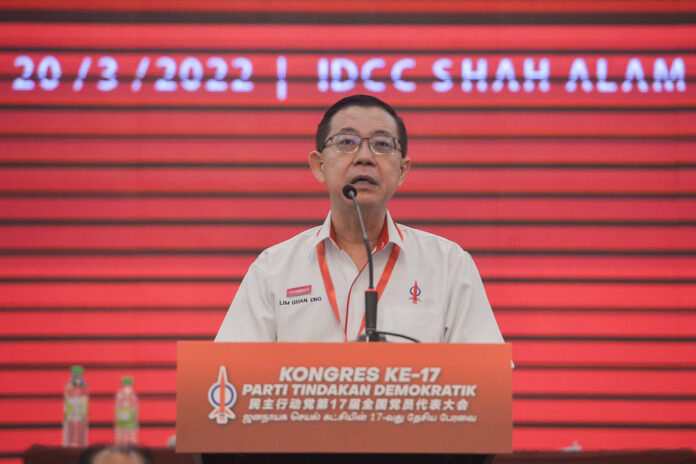 SHAH ALAM, March 20 — DAP wants a definite date from the government on the tabling of law against party-hopping in Parliament, said its Secretary-General Lim Guan Eng.

He said the party would seek clarity with Prime Minister Datuk Seri Ismail Sabri Yaakob on the matter, otherwise, the Memorandum of Understanding (MoU) between the government and the Pakatan Harapan (PH) opposition coalition would be automatically “cancelled”.

The Bagan Member of Parliament said the party had no problem extending the parliament sitting to pass the bill, as long as the tabling of the law is not deferred.

“If they extend but can’t find early approval or whatever, that is OK, as long as we have a definite date… we will discuss it when he (Ismail Sabri) returns from Vietnam.

“If this (Anti Hopping Law) cannot be passed, that is the end of the MoU,” he said during a press conference at the 17th DAP National Congress 2022 here, today.

Yesterday, Minister in the Prime Minister’s Department (Parliament and Law) Datuk Seri Dr Wan Junaidi Tuanku Jaafar said the bill for an anti-hopping law would only be tabled at the Dewan Rakyat after opinions and input from all quarters were obtained and all the engagement sessions were concluded.

However, Lim indicated that the MoU inked between the government and PH would be automatically “cancelled” if any of the conditions, including the tabling of the anti-hopping law bill, were not met.

The MoU, signed in September last year by Ismail Sabri and PH party leaders, agreed that there should not be a dissolution of Parliament at least until July 21.

Ismail Sabri begins his first official visit to Vietnam from today till March 22.

Free engine oil change programme to be held in conjunction with...