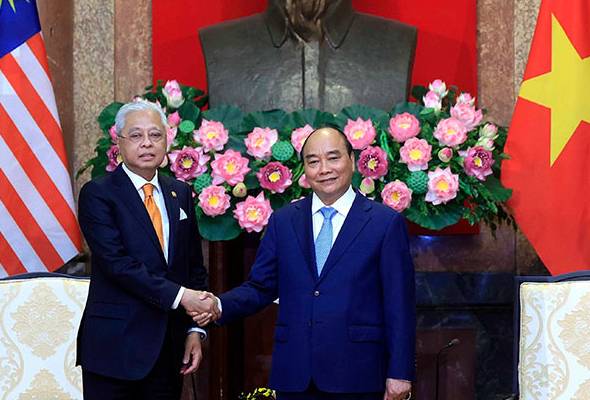 At the meeting, which lasted over 40 minutes, both parties thanked each other for the good relationship that has been established over the years.

He also praised the Vietnamese officials for the warm hospitality accorded to him and the entire Malaysian delegation.

Phuc, meanwhile, also hoped Kuala Lumpur-Hanoi ties would continue to be strengthened as both nations prepare to celebrate the 50th anniversary of establishing diplomatic relationship in 2023.

The Prime Minister and his delegation later paid a courtesy call on the General Secretary of the Communist Party of Vietnam (CPV), Nguyen Phu Trong at the CPV headquarters.

At the meeting, Ismail Sabri said he was confident that his maiden visit to Vietnam would further enhance ties between the two countries.

The Prime Minister later ended his two-day official visit to Vietnam by paying a courtesy call on chairman of the National Assembly, Vuong Dinh Hue at the Parliament Building here.

“Throughout our stay in Vietnam, we received very warm and friendly treatment from the Vietnamese government,” said Ismail Sabri.

Hue, meanwhile, said the Vietnamese government was confident the visit would continue to strengthen bilateral ties.

During the meetings, Ismail Sabri spoke fully in Bahasa Malaysia, which was then translated to English.

Earlier this morning, the Prime Minister was given a red-carpet welcome upon arriving at the Presidential Palace and greeted by his Vietnamese counterpart Pham Minh Chinh.

The Prime Minister’s maiden visit to Vietnam is upon the invitation of Chinh.

Ismail Sabri, who arrived yesterday, is scheduled to return to Kuala Lumpur on Tuesday (March 22) morning after holding a press conference with the Malaysian media.

Statements recorded from more than four individuals over Undi 18 protest...