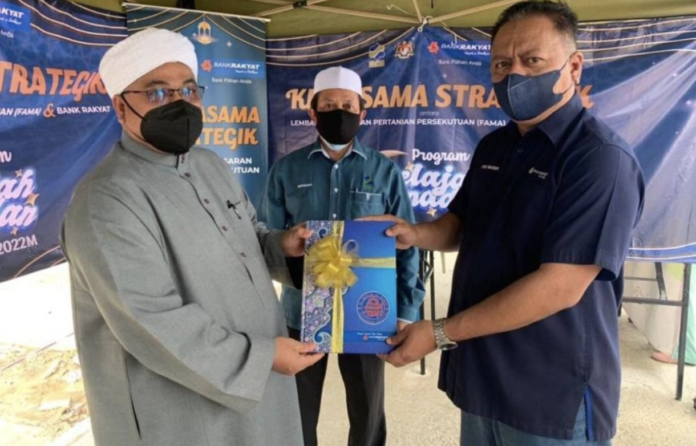 KOTA BHARU, April 8 (Bernama) — The Federal Agricultural Marketing Authority (FAMA) has channelled donations contributions to a total of 73 asnaf (poor Muslims eligible for tithes) at Telipot Mosque and several other areas in Kelantan yesterday through its Ramadan Roadshow programme.

Its deputy director-general (Development), Datuk Mohamad Mustahapa Awang said the donations were in line with the Keluarga Malaysia (Malaysian Family) concept implemented by the government and could highlight the aspirations of the people in the country who are always united and helpful to each other.

“Each recipient will receive a food kit of basic necessities worth RM200. Such activities will be continued throughout the country to help those in need,” he said in a statement today.

He said the programme could also indirectly highlight FAMA’s role in the local community and in helping the needy during the month of Ramadan.

“The Ramadan Roadshow this time includes the MyRakyat programme at Telipot Mosque Ramadan Bazaar and the distribution of ‘gulai kawah’ (Malay special stew) to visitors.

“Besides this, there will be breaking of fast and Tarawih prayers held with the local community as well as the delivery of services by FAMA and Bank Rakyat to help the local community to understand the roles and tasks performed to meet the needs of stakeholders,” he said.

He also said that Bank Rakyat had contributed to the success of FAMA’s Ramadan Roadshow programme through donations worth RM414,000 to FAMA on March 31 at the Dewan Dato’ Zainal Abidin, FAMA headquarters in Bandar Baru Selayang, Selangor. The donation is in the form of food kits that will be donated to almost 2,070 people comprising asnaf nationwide.