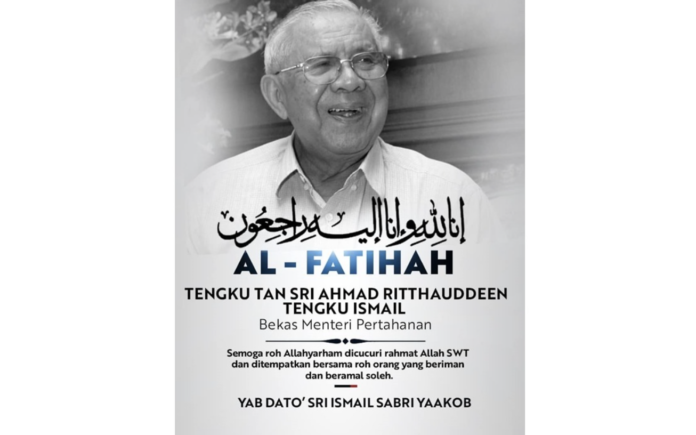 In a posting on his official Facebook, Ismail Sabri said that on behalf of Keluarga Malaysia (Malaysian Family), he prayed that Tengku Ahmad Rithauddeen’s family would be patient and resolute in facing this difficult time.

Describing Tengku Ahmad Rithauddeen as a highly respected UMNO veteran and with vast experience in the government’s administration, Ismail Sabri said his death was a great loss for the country.

“He was Defence Minister from 1987 to 1990 and among other positions he held in the government included as Minister of Foreign Affairs, Minister of Trade and Industry and Minister of Information.

“In the political arena, the deceased, also known as Ku Deen, used to be the chairman of the UMNO Disciplinary Board and a Member of the UMNO Supreme Council. May his soul be showered with Allah’s blessings and placed with the righteous. Al-Fatihah,” according to the posting.

Tengku Ahmad Rithauddeen died at his residence in Jalan Duta yesterday due to old age.

His son, Tengku Farith, said his father was sent to a private hospital two weeks ago following a stroke and had been discharged, but suffered from shortness of breath yesterday and died.