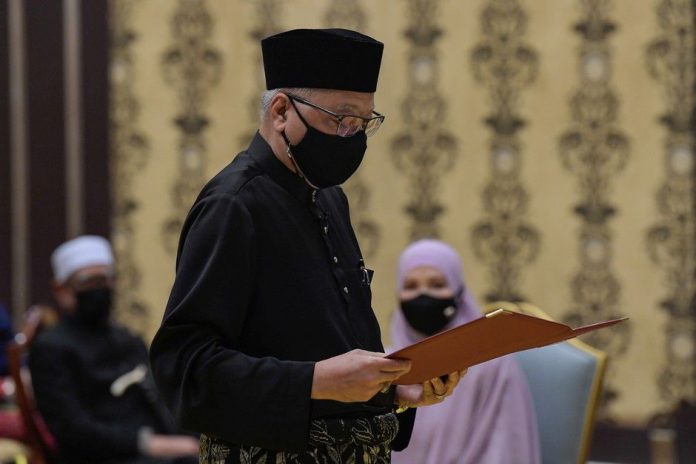 KUALA LUMPUR, Aug 21 — Datuk Seri Ismail Sabri Yaakob was today sworn in as Malaysia’s ninth prime minister, raising hope that the political upheaval seen in the country the past weeks would be a thing of the past.

Ismail Sabri, 61, who is UMNO vice-president, is the third prime minister to be appointed in a three-year period since the 14th general election (GE14) on May 9, 2018, after Tun Dr Mahathir Mohamad and Tan Sri Muhyiddin Yassin.

Ismail Sabri’s appointment was made by Yang di-Pertuan Agong Al-Sultan Abdullah Ri’ayatuddin Al-Mustafa Billah Shah in accordance with Article 40(2)(a) and Article 43(2)(a) of the Federal Constitution.

Ismail Sabri had been the front-runner for the post after Muhyiddin resigned as the prime minister on Aug 16 on grounds that he had lost majority support among Members of Parliament (MPs).

Muhyiddin, who is Parti Pribumi Bersatu Malaysia (Bersatu) president and Pagoh MP, made that decision after 15 UMNO MPs withdrew support for him and his Perikatan Nasional (PN) government.

Muhyiddin also offered a framework of cross-party cooperation to the opposition in a proposed confidence vote in the Dewan Rakyat but it was rejected.

Ismail Sabri, the Bera MP, was appointed deputy prime minister by Muhyiddin on July 7 and that appointment might have also paved the way for his ascension to the top.

Ismail Sabri was nominated for the prime minister’s post by 114 MPs through statutory declarations and their declaration of support was verified by Al-Sultan Abdullah at audiences granted to the elected representatives.

The Dewan Rakyat has 222 seats but two seats which fell vacant due to the deaths of the MPs have not been filled.

Ismail Sabri’s appointment has come at a time when the country has entered a critical phase of its national vaccination programme and daily COVID-19 cases have beached the 20,000 mark.

For sure, many would be looking to Ismail Sabri to keep the immunisation programme on track as he had been instrumental in the fight against COVID-19, including enforcement of the standard operating procedure (SOP) and other measures to bring the country out of the pandemic.

It is also the hope of many especially the business community that the new prime minister would give a boost to efforts to revive the economy, which has been battered by COVID-19.

Attention will now move to Ismail Sabri’s selection of his Cabinet and the motion of confidence in the Dewan Rakyat for him to confirm his legitimacy as the ninth prime minister.