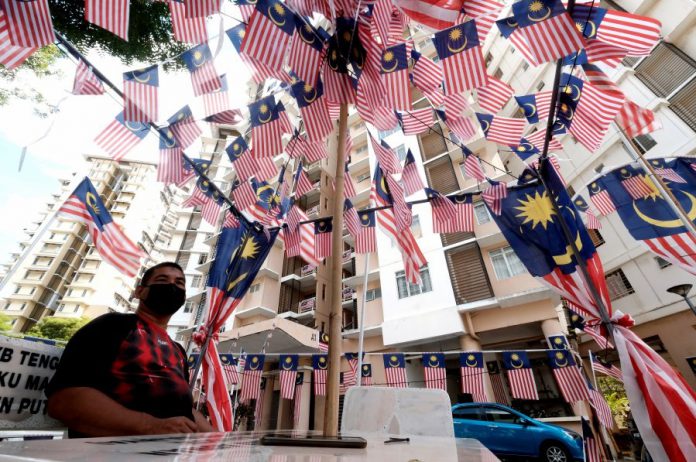 PUTRAJAYA, Aug 22 — Every year as August approaches, the residents of Block A1 Phase 7, Precinct 9 here will have a ‘gotong-royong’ to beautify their housing area and homes with the Jalur Gemilang.

This year despite the restrictions on movement following the COVID-19 pandemic, the government quarters occupants remained full of enthusiasm as they go about hanging up national flags to ensure a lively and celebratory atmosphere at the housing block.

Block A1 chairman Noraida Din, said about RM400 has been spent this year to install over 400 flags of various sizes and decorative lights around the housing block area.

“Some of the flags have been recycled from previous years and we also received contributions of 100 flags from the Putrajaya Corporation (PPj),” he told Bernama.

A total of 200 flags have been placed around the compounds of the housing quarters, and the rest were installed to decorate the house units and Laman Santai garden seats in the area.

Noraida who is also the Rukun Tetangga chairman for the block, said he and nine other committee members took two days to beautify the block with the Jalur Gemilang to enliven the national day spirit among residents of all ages.

“We hang up these decorations to promote a sense of patriotism among them especially young people so that they are aware of the history and importance of the National Day.

“At Laman Santai, we have put up Rukun Negara posters to enable the residents to take selfies or photographs and gain knowledge while relaxing there,” he said.

Meanwhile, PPj president Datuk Muhammad Azmi Mohd Zain said about 4,620 Jalur Gemilang have been installed in several locations in Putrajaya and 4,000 flags have been distributed to the local community through the resident representative council or block leaders.

He said a total of 2,230 flags have been installed on lamp posts, at bridges and complexes belonging to PPj, and another 2,390 flags at public parks.

“I hope more people will fly the Jalur Gemilang and join the merriment this year while adhering to standard operating procedures,” he said.