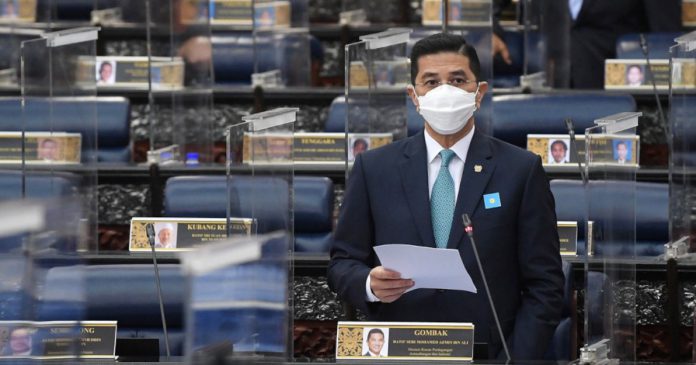 KUALA LUMPUR, Sept 28  — The 12th Malaysia Plan (12MP) will be a catalyst for sustainable economic growth for Malaysia after the COVID-19 pandemic hampered the efforts that have been implemented so far.

Senior Minister Datuk Seri Mohamed Azmin Ali, who is also the Minister of International Trade and Industry, said the 12MP’s comprehensive plan would boost the economy to a higher level, generate rapid growth and be able to create wealth to be shared by Keluarga Malaysia.

He said the 12MP presented by Prime Minister Datuk Seri Ismail Sabri Yaakob in parliament yesterday was an extension of the hard work of former prime minister Tan Sri Muhyiddin Yassin who started engaging with various parties as an inclusive measure.

He said the allocation of RM400 billion showed the government’s commitment to meet the challenges of the dynamic global economy.

“The 12MP projects an average annual private investment target of RM258 billion and to achieve this target, the Ministry of International Trade and Industry (MITI) will strengthen the country’s economic fundamentals by focusing on promoting open, transparent and business-friendly trade and investment,” he said in a statement today.

Mohamed Azmin said the government would also ratify the Regional Comprehensive Economic Cooperation Agreement (RCEP) and the Comprehensive and Progressive Agreement for Trans-Pacific Partnership (CPTPP) which would give wider market access to local industries.

He said the five-year plan also emphasised the development of new growth sectors in sharpening the country’s economy in line with MITI’s efforts including the development of the Fourth Industrial Revolution (4IR), environmental, social and governance (ESG) elements, halal and aerospace industries.

“This is in line with the National Investment Aspirations Policy (NIA) to attract high-impact and high-tech foreign investors to enhance Malaysia’s competitiveness and attractiveness as a regional investment hub,” he said.

He said the prime minister’s emphasis on making Malaysia a carbon neutral country by as early as 2050 was in line with the NIA’s thrust to accelerate green growth by placing more emphasis on ESG.

In implementing this effort, he said, MITI gave priority to efforts to strengthen the ecosystem for the development of energy efficient vehicles (EEVs) including electric vehicles (EVs).

“To ensure the growth of an inclusive new sector, micro, small and medium enterprises (MSMEs) are also given major attention to adapt their businesses to automation, technology and digitalisation for business sustainability.

“As MSMEs are the backbone of the country’s economy, the 12MP also aims to increase the sector’s GDP contribution to 45 per cent,” he said.

The empowerment of MSMEs through digitalisation will inject dynamism into the entire economic chain, especially in rural areas in line with the goal of Vision for Common Prosperity 2030 to make Malaysia a sustainable developing country in line with fair, equitable and inclusive economic distribution.

“While the investment and trade landscape remains challenging and competitive, I am confident the 12MP is on track, supported by the National Recovery Plan which has outlined several proactive measures to drive the economic recovery agenda and ensure sustainable growth,” he added.