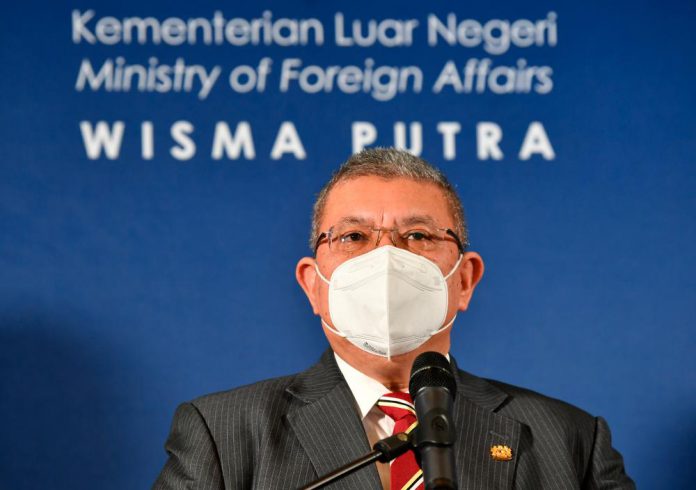 KUALA LUMPUR, Nov 5 — The Ministry of Foreign Affairs will intensify the promotion of Cultural Diplomacy via a programme billed the ‘Internationalisation of Malay Language and Literature’, to be conducted through its diplomatic missions abroad.

Foreign Minister Datuk Saifuddin Abdullah said the programme, which marks the first collaboration between the ministry with Dewan Bahasa dan Pustaka (DBP) and the Malaysian Institute of Translation & Books (ITBM), is in line with the new post-pandemic Malaysian Foreign Policy Framework recently approved by the Cabinet.

He said the efforts will include, among others, a more systematically-updated Malay language and culture courses in Malaysian missions around the world.

He also said small-scale coaching had begun at several Malaysian embassies, including in Indonesia, Thailand, China, and Russia.

“This effort will definitely be continued more systematically, with some additional funds. We will also offer Malay language courses for the country’s diplomatic officers who will be working in Malaysia,” he said at a press conference after a meeting with DBP and ITBM at Menara DBP here, today.

Saifuddin said Cultural Attachés dealing with language and literature education will be stationed at major embassies, for a start.

He, however, said the matter requires further discussions other ministries.

Responding to a reporter’s question on the commencement of the plan, Saifuddin said: “I hope at our level in KLN (Foreign Ministry) before the end of this year, we can complete the structure and the terms of reference to be provided to ambassadors and all Malaysian missions.”

Meanwhile, Saifuddin said the Wisma Putra (Foreign Ministry) will also play a greater role in promoting the Malay language and literature across the country.

“Under DBP, for example, there are joint activities with the Brunei Darusslam-Indonesia-Malaysia Language Council (MABBIM), the Southeast Asian Literature Council (MASTERA) and the Malay Language International Council (MABIM).

“This matter is rarely in Wisma Putra’s reference; therefore I think, in terms of cooperation, Wisma Putra will play a role in facilitating relations with the countries involved,” he said.